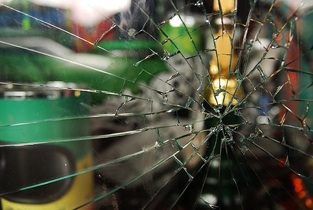 Editor’s note: The following is a guest post by Eric Clemons, Professor of Operations and Information Management at The Wharton School of the University of Pennsylvania. In it, he argues that the Internet shatters all forms of advertising.  “The problem is not the medium, the problem is the message, and the fact that it is not trusted, not wanted, and not needed,” he writes. The views he expresses are his own, and we present them here to foster debate.  (Obviously, we hope there is a place for advertising on the Internet since it pays our bills). Update This post has obviously touched a nerve. Clemons responds to his critics below at the bottom of the post.

1. There Must Be Something Other Than Advertising:

The expected drop in internet advertising revenues this year was neither unpredictable nor unpredicted, nor was it caused solely by the general recession and the decline in retail sales.  Internet advertising will rapidly lose its value and its impact, for reasons that can easily be understood.  Traditional advertising simply cannot be carried over to the internet, replacing full-page ads on the back of The New York Times or 30-second spots on the Super Bowl broadcast with pop-ups, banners, click-throughs on side bars.  This might be a subject where considerable disagreement is possible, if indeed, pushed ads were still working in traditional media. Mostly they have failed. One newspaper after another is going out of business across the United States, and the ad revenues of traditional print media, even of highly respected magazines, is declining. The ultimate failure of broadcast media advertising is likewise becoming clear.

Pushing a message at a potential customer when it has not been requested and when the consumer is in the midst of something else on the net, will fail as a major revenue source for most internet sites.  This is particularly true when the consumer knows that the sponsor of the ad has paid to have this information, which was verified by no one, thrust at him.  The net will find monetization models and these will be different from the advertising models used by mass media, just as the models used by mass media were different from the monetization models of theater and sporting events before them.  Indeed, there has to be some way to create websites that do other than provide free access to content, some of it proprietary, some of it licensed, and some of it stolen, and funded by advertising.

The idea that content has a price and net applications should find ways to earn a profit without providing free access to other people’s content gets explosive reactions; when virtual reality pioneer and tech guru Jaron Lanier suggested in a New York Times Op Ed that authors deserved to be paid for their content he actually received death threats.  But other models are possible and several suggestions for alternative forms of monetization are offered below.

The internet is the most liberating of all mass media developed to date.  It is participatory, like swapping stories around a campfire or attending a renaissance fair.  It is not meant solely to push content, in one direction, to a captive audience, the way movies or traditional network television did.  It provides the greatest array of entertainment and information, on any subject, with any degree of formality, on demand.  And it is the best and the most trusted source of commercial product information on cost, selection, availability, and suitability, using community content, professional reviews and peer reviews.

My basic premise is that the internet is not replacing advertising but shattering it, and all the king’s horses, all the king’s men, and all the creative talent of Madison Avenue cannot put it together again. To analyze this statement we need a working definition of advertising, and I proposed the following, which is as general as I could make it:

Advertising is using sponsored commercial messages to build a brand and paying to locate these messages where they will be observed by potential customers performing other activities; these messages describe a product or service, its price or fundamental attributes, where it can be found, its explicit advantages, or the implicit benefits from its use.

It is frequently argued that the advertising industry will provide sufficient innovation to replace the loss of traditional ads on traditional mass media.  Again, my basic premise rejects this, suggesting that simple commercial messages, pushed through whatever medium, in order to reach a potential customer who is in the middle of doing something else, will fail.  It’s not that we no longer need information to initiate or to complete a transaction; rather, we will no longer need advertising to obtain that information.  We will see the information we want, when we want it, from sources that we trust more than paid advertising.  We will find out what we need to know, when we want to make a commercial transaction of any kind.  The conventional wisdom is that this is exactly what paid search helps us to do, but all too often they are nothing more than a form of misdirection, as I explain further below.  Instead, we will use information that we trust, obtained at the time that we want to see it.

Better targeting of ads using individual interests and individual behaviors will ensure that we do not bore or annoy as many people with each ad, but cannot address the trust issue. As for paid search, it is closer to other mechanisms that allow a website to sell access to potential customers. It works effectively as a revenue source for Google, of course. But it surely is not replicable for the average content website.

3. Advertising will fail for three reasons:

There are three problems with advertising in any form, whether broadcast or online:

Yes, both network executives and their ad agencies have noted that we are not watching traditional ads, and they attribute this to the fact that we have moved beyond newspapers, televised network news, and broadcast movies, to video games, iPods, and the internet.  Porting ads to a new medium will not solve the three problems noted above.  The problem is not the medium, the problem is the message, and the fact that it is not trusted, not wanted, and not needed.

4. Alternative models for monetization are available:

Again, my research suggests that there are three general categories for creating value that can be monetized, including selling real things, selling virtual things, and selling access. Some websites exist solely to sell real things.  Many of the best-known perform aggregation of demand, so that there will be enough customers to justify stocking and selling items for which there is only limited demand.  Amazon is merely the best-known example.  Sites like Amazon and Zappos are especially good for long tail items … where else do you go for a copy of the Green Sea of Heaven, Elizabeth T. Gray’s magnificent translation of the Ghazals of Hafiz, or for a pair of size 20 basketball shoes?  Selling real things online has been studied since the advent of interest in eCommerce and will not be discussed further here. Other websites sell virtual things.  These activities fall into three categories:

Finally, some websites create and sell access to customers.  Again, this can be divided into multiple categories.

Of course no one knows yet, but if I had to guess, based on my meatspace experience, I would offer the following guesses for successfully monetizing the net in the future:

The internet is about freedom, and I suspect that a truly free population will not be held captive and forced to watch ads.  We always knew that freedom comes at a price; perhaps the price of internet freedom and the failure of ads will be paying a fair price for the content and the experience and the recommendations that we value.

OK, guys.  It’s time to calm down.  I did not insult you, your families, your religions, or your rottweilers.

I may have presented a message you did not want to hear.  Let me summarize it again, for those of you who appear to have commented on it without reading it:

If you disagree with me, it would be helpful to think about the basic premises of the article and to refute them:

Or you can continue to laugh, or to attack.  That does not constitute a response, and it does not help you plan for the future.  But a few parting thoughts may help you construct stronger attacks.

So … those of you with commercial interests in online advertising … you can laugh at me.  You can attack me.  Or you can think about how you can protect yourselves and your companies against the changes that are going to come.