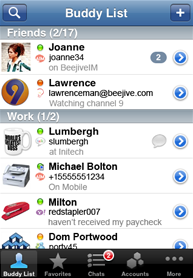 BeeJive IM for iPhone, a popular instant messaging application, saw an update this week which added Facebook support to its corral of services. In the hours after the release, reports began to trickle in that something wasn’t quite right. For what seemed like a random group of people, the screen would suddenly read “PC LOAD LETTER” whenever the user tried to establish a connection to any IM service, then quickly switch to a Youtube clip from the movie Office Space.

What had happened? Had Beejive been hacked? Was it an easter egg gone awry? Turns out, it was completely intentional: it’s an anti-piracy measure.

This evening, we’ve received an official statement from Beejive on the matter :

We have recently implemented new anti-piracy measures in BeejiveIM for iPhone. We have tried to keep our approach fun with an error message and a video. But we hope our message is clear: please respect the work of developers.

A quick Google search for “Beejive” and “PC Load letter” turns up only a few dozen results, a number of which are people complaining that they’ve been banned unfairly. We have been unable to confirm any of these reports. Some are theorizing that Beejive is simply banning any jailbroken iPhone they detect. We’ve got (at least) one jailbroken iPhone floating around the office running a legitimate copy of Beejive, and it’s still fully functional. Other reports indicate that deleting the pirated app and purchasing a legitimate copy does not immediately fix the issue. This leads us to believe they are detecting if the user is running a modified version of the application (likely the info.plist file, which requires a specific line to be added during the application cracking process), adding any user flagged as using a modified copy of the application to a blacklist by way of their handset’s unique device ID. If this is the case, banned users may stay banned indefinitely.

Beejive nearly always makes references to the movie Office Space in their promotional iPhone screenshots, generally using character names as screen name placeholders. The “PC Load Letter” message continues this tradition – it’s the error message that the office printer displays up until it meets its end at the business end of a baseball bat.

Screenshot of the error: 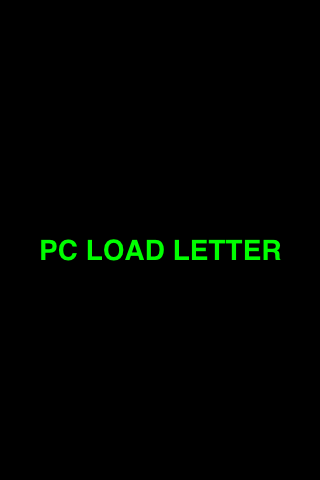