We’ve all tried to use our camera phones to capture whiteboard notes, doodles, and other documents, but oftentimes poor image quality and odd perspectives can make them illegible. JotNot (iTunes Link) is a nifty new application that just went live on Apple’s App Store that allows users to take photographs of documents using their phones and runs them through an advanced filter that makes them much easier to read. The application is available on the App Store for $3.99, and the first ten TechCrunch readers to send a request to promo@jotnot.com will be given access codes to download the app for free.

Using the application is simple: first, you take a photograph of the whiteboard, receipt, or document that you’d like to store as a photo (you can also import photos that you’ve previously taken). The application presents a blue box with four corner markers, which you drag to the corresponding corners of the document in question. The application then takes around thirty seconds to process the image, correcting for any issues with lighting, color, and even perspective (if you initially took a photo of your document at an angle, the final image will look as if it was taken front-on).

There are a handful of web-based services like Qipit and Scanr that offer similar functionality, but some businesses object the prospect of having to upload potentially private and confidential notes and documents to a third party website. JotNot’s image processing occurs entirely on the iPhone, so this isn’t an issue. 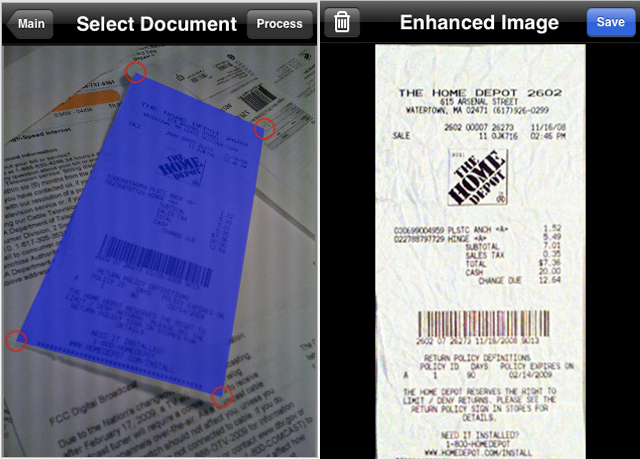 In my testing the application seems to work very well, handling papers, notes, and even somewhat-crumpled receipts without much trouble. But while it does a great job at converting these documents to image files, there’s still one potentially major flaw: there’s no way to convert those images into searchable digital documents, which is something that is offered by the aforementioned web-based services. JotNot plans to eventually incorporate optical character recognition (which converts photos into digital text documents), but it sounds like this is still fairly early in development. In any case, the application works perfectly for casually taking photographs of your documents to ensure that you don’t lose them, and is one that I’ll probably wind up using pretty frequently.

Android users can also check out a beta version, though that version does send files back to JotNot’s servers, making it prone to the same privacy issues as the web based services. And if you don’t like JotNot, a similar application called Whiteboard Capture is available for the iPhone.