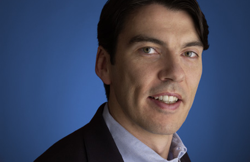 Breaking: AOL has named a new CEO and chairman. Tim Armstrong, who headed up ad sales in the Americas for Google, will replace Randy Falco as chairman and CEO. AOL President and COO Ron Grant will also be leaving the company. Armstrong’s name has been bandied about as a potential CEO or top executive at several companies. He takes on a challenging post at AOL, which does not have the strength of either Google or even Yahoo in terms of advertising assets or traffic.

This was a very closely held hiring, say our sources – even top execs at AOL weren’t told about Falco’s leaving until just before the press release went out earlier this afternoon.

Falco came from NBC when his predecessor Jonathan Miller was kicked out. Falco reorganized AOL, focusing on combining its portal (which still generates a huge amount of traffic) with its advertising assets—now bundled together under Platform-A. His strategy was to make AOL an ad network, with AOL’s own properties serving as a foundation and source of guaranteed inventory.

But the advertising strategy never quite took hold. Partly, that was because the economy blew up. Last quarter, advertising revenues at AOL were down 18 percent, total revenues were down 23 percent, and the company took a $2.2 billion writedown for previous acquisitions. Yahoo, however, saw only a 2 percent decline in display advertising during the same quarter, and a one percent decline in overall revenues. Google’ revenues, meanwhile, grew 18 percent. powered by search advertising. Armstrong was responsible for a big chunk of that revenue, and his expertise in the still-growing part of online advertising—search—no doubt made him a big catch for Time Warner CEO Jeff Bewkes.

AOL definitely has a sales issue, as is clear by its relative performance to Yahoo and Google. And Armstrong is seen as someone who can help solve that, along with another recent hire, Greg Coleman from Yahoo. Coleman is the new head of sales at AOL. But what would entice Armstrong to leave Google, especially if he was the beneficiary of some of the recently repriced options?

Time Warner wants to get rd of AOL. It was looking to sell it outright, but now it is gearing up more for an eventual spin-off. If Armstrong can get AOL in shape for an IPO or make it attractive enough for a buyout offer from Microsoft or some other acquirer, he will get his payday.

Below is the press release:

In making the announcement Mr. Bewkes said: “Tim is the right executive to move AOL into the next phase of its evolution. At Google, Armstrong helped build one of the most successful media teams in the history of the Internet — helping to make Google the most popular online search advertising platform in the world for direct and brand marketers. He’s an advertising pioneer with a stellar reputation and proven track record. We are privileged to have him preside over AOL as its audience and programming businesses continue to grow and its advertising platform expands globally. He’ll also be helpful in helping Time Warner determine the optimal structure for AOL”

Tim Armstrong said: “I’m very excited about the opportunities presented in leading AOL. AOL has a wide-ranging set of assets and audience. The company is well positioned to enhance those assets into a larger share of the Internet audience and advertiser communities. AOL and Google have been partners for years and I look forward to collaborating with Jeff Bewkes and his team as we explore the right structure and future for AOL.”

Mr. Bewkes added: “Randy led AOL in its transition from a subscription business to an audience business. Under Randy and Ron, AOL’s programming sites exhibited year-over-year growth in unique visitors for 23 consecutive months with many of its sites now in the top five of their categories., They also assembled Platform-A, the number one display ad network in the U.S. with a reach of more than 90%. They also aggressively cut costs as they restructured the Audience business portion of the company into three distinct operating units: People Networks, MediaGlow, and Platform-A. As Randy and Ron move on, they leave AOL with our gratitude and appreciation for remaking the company and bringing it to a new and promising level.”

Tim Armstrong was a member of Google’s Operating Committee and served as the president of the Americas Operations. Under the Americas Operations, Armstrong’s team managed publishers and advertisers’ relationships and platforms with some of the world’s most widely recognized media and agency brands. Armstrong started at Google in the year 2000 and opened the first office outside of the Mountain View, CA headquarters.

Mr. Armstrong joined Google from Snowball.com, where he was vice president of sales and strategic partnerships. Prior to his role at Snowball.com, he served as director of integrated sales & marketing at Starwave’s and Disney’s ABC/ESPN Internet Ventures, working across the companies’ Internet, TV, radio, and print properties. He started his career by co-founding and running a newspaper based in Boston, MA, before joining IDG to launch their first consumer Internet magazine, I-Way.