PluggedIn, a startup that launched back in April 2008 as a Hulu for music videos, is closing up shop. The company has run out of money after negotiations for a $2.5 million Series B funding round fell apart at the last minute. Co-founder Brett O’Brien says that PluggedIn is currently seeking buyers for the company’s technology and team for a price of around $3 million (the company’s cost of investment).

PluggedIn differentiated itself from the plethora of other music sites by offering a library of over 11,000 licensed High Definition music videos, presented in a simple and aesthetically pleasing interface that was not unlike Hulu’s. Users could browse through over a million artist profiles (which were dynamically generated from content on sites like Wikipedia), and could use an app built on Adobe’s AIR platform to automatically generate a user profile featuring their favorite artists. The site also offered some basic social functionality, though it sounds like PluggedIn development was cut short before ultimately launching a “distributed social media player” that could be embedded elsewhere but still retain interaction between site members.

Despite its attractive interface and high quality videos, the site never really took off. This is probably because there are already a number of very well established music communities, like MySpace Music, which have millions of users and many of the same of music videos (albeit at a lower bitrate). HD quality is a nice perk, but most users simply don’t care enough about it to jump ship and join an entirely new community. And unlike some of these competitors, PluggedIn requires the Move Networks video streaming plugin, which raises the barrier of entry (though it is fairly common since it is also used by Fox, The CW, and ABC). That said, PluggedIn’s technology may well be an appetizing prospect for websites that already get a significant amount of traffic.

PluggedIn has been added to the Deadpool. 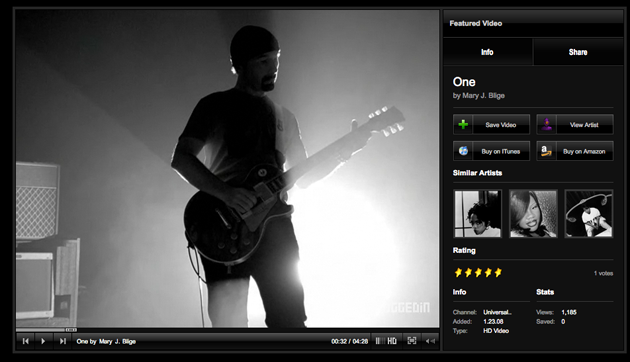