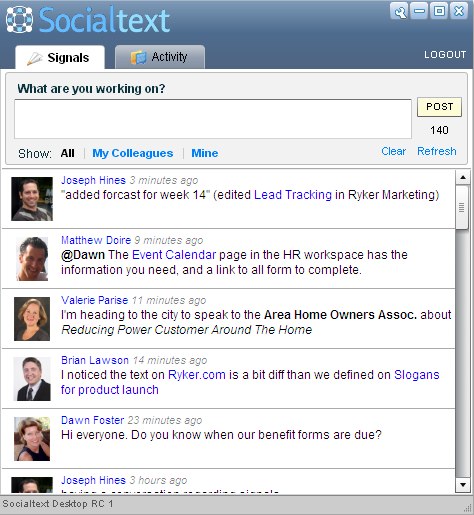 In yet another sign that this will be the year of the activity stream, Socialtext is adding a Twitter-like message stream to its enterprise wiki/workspace service, The new feature is called Socialtext Signals, and it appears both as a widget in the Socialtext dashboard and as a standalone desktop app built on Adobe AIR.

Socialtext Signals is essentially an enterprise version of Twitter, much like Yammer. Employees within a company can micro-message each other without competitors or the rest of the world snooping. They will see only the messages of the co-workers they are following. In addition to the 140-character messaging between co-workers (the “signals”), there is also an “activity” tab. This generates a micro-message every time a person you are following takes an action inside Socialtext, such as creating a wiki page, writing a blog post, or making a comment.

The activity stream which Socialtext makes visible is very particular to its products, and in fact is designed to keep employees engaged with those products. Any time someone changes a page that you’ve created or edited in the past, it shows up as an activity. So constant updates from Ralph in engineering about the progress of a project serves as a reminder for everyone else to do their part as well. Unlike Yammer, there is no ability to create subgroups within Signals, or upload files. But then, you can always create workgroups elsewhere in Socialtext, and upload files directly into linked wikis. Signals just ties it all together. There is no mobile support either, however, which is a more serious gap.

Socialtext is used as a collaboration tool by 5,000 companies (subscriptions are as much at $15 per employee per month). Signals and the desktop app should go far towards increasing employee interaction with the service. Each update serves as a prompt to follow up on a project or keep it moving along, while Signals can also serve as the new watercooler. Companies that don’t need Socialtext’s other apps (the workspace and the dashboard, primarily) might want to check out a simpler enterprise micro-messaging service such as Yammer or WIzeHive. 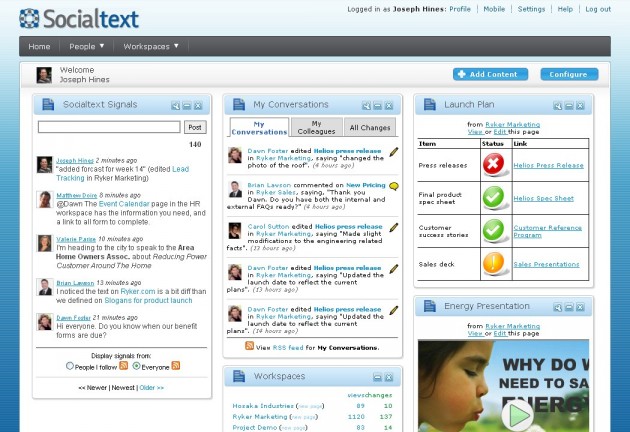