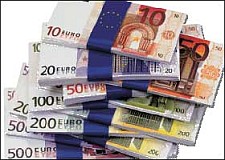 London-based investing hotshot Index Ventures has just announced a new early-stage 350 million Euro venture fund. To hear partner Bernard Dalle tell it, raising the fund was a breeze, with all existing limited partners re-upping their investments. He further said that good startups in London are having no problems raising venture capital and deal flow was just as strong. Really? Well, I guess all those reports that this is a global downturn were just plain wrong! You heard it here, struggling Silicon Valley startups: Just move to London!

Apologies for giving Dalle a bit of a hard time, but I am subbing for Michael Arrington, and it’s a huge pet peeve of mine when venture capitalists blithely shrug off an epic downturn that, let’s face it, has to be hitting them in some way. Let’s just say, I don’t buy that it’s all still that easy.

Of course if anyone could make it look easy, I’d give it to Index. The firm has torn through its 2007 fund of the same size, raised a $400 million late stage fund last year, and has had a string of big exits including Skype and MySQL. Those two helped to rank its best-known partner Danny Rimer as number 16 on Forbes’ annual Midas List. I first knew Rimer as an open source software bull, and last I talked to him, he was bullish on a reinvention of ecommerce.

For Dalle’s part, he wouldn’t tell me much about where the firm was investing going forward. He said the firm would still focus geographically on Europe, Israel and the U.S. and was looking closely at mobile advertising, that ever-present buzzword “the cloud” and virtualization.

Regardless of the fact that I could have gotten more answers from the CIA than this briefing, I congratulate Index on the new fund and indeed hope that money and deal flow is holding up as well as they say across the pond. If you’re in Europe raising money, let us know your experiences in the comments.