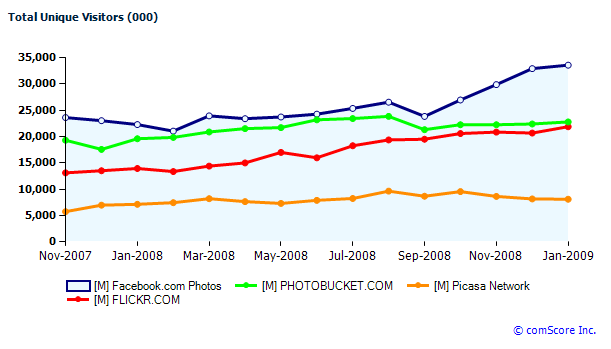 If Facebook has one standout application it has to be Photos. Measured on its own, it is the largest photo site on the Web. A full 69 percent of Facebook’s monthly visitors worldwide either look at or upload photos, based on comScore data. And more than 10 billion photos have been uploaded to the site.

And it’s been pulling away from its competitors. As can be seen in the comScore chart above, as recently as last September the top three photo sites in the U.S. were running neck-and-neck, with Facebook Photos at 23.9 million unique visitors, followed by Photobucket at 21.3 million uniques, and Flickr at 19.5 million uniques. But by January, the number of monthly U.S. visitors going to Facebook Photos shot up 41 percent to 33.6 million. Meanwhile, Photobucket is up only 7 percent to 22.8 million, while Flickr is up 12 percent to 21.9 million. (Picasa is a distant fourth in the U.S. with 8.1 million).

In other words, Facebook increased the gap between its closest competitor (Photobucket in the U.S.) from 2.6 million monthly unique visitors to 10.8 million. On a worldwide basis, the gap between Facebook Photos and Flickr (which is the No. 2 site globally, and looks like it is about to pass Photobucket in the U.S.) went from 41.2 million unique monthly visitors in September to 87 million in December (the most recent data available, see chart below).

What accounts for Facebook’s advantage in the photo department? The biggest factor is simply that it is the default photo feature of the largest social network in the world. And of all the viral loops that Facebook benefits from, its Photos app might have the largest viral loop of all built into it. Whenever one of your friends tags a photo with your name, you get an email. This single feature turns a solitary chore—tagging and organizing photos—into a powerful form of communication that connects people through activities they’ve done in the past in an immediate, visual way. I would not be surprised if people click back through to Facebook from those photo notifications at a higher rate than from any other notification, including private messages.

But the tagging feature has been part of Facebook Photos for a long time. What happened in September to accelerate growth? That is when a Facebook redesign went into effect which added a Photos tab on everyone’s personal homepage. 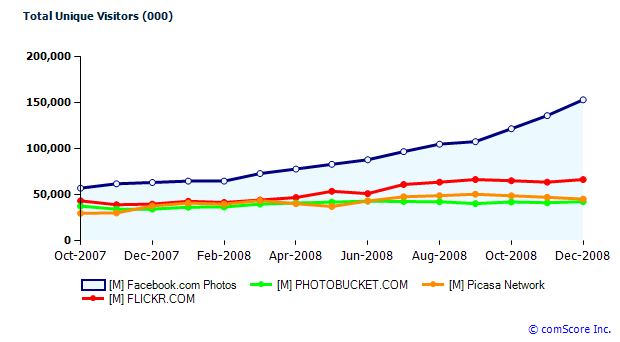