Intuit, the company behind the well-known Quicken suite of money management software that includes Quicken Online, can’t believe how well its competitor Mint is doing. In fact, they were so bewildered by Mint’s claims of gaining 3,000 new users a day and jumping from 600,000 to 850,000 users in a matter of months that they decided to send a threatening letter demanding an explanation for this apparently inconceivable feat.

“While we do not wish to suggest that Mint.com is engaging in false advertising, the substantial difference in claimed user numbers over a short period time [from 600,000 to 800,000] is of some concern. As a result, we’re requesting that you provide us with the Substantiation and evidence that you rely upon to support the above reference claims… before February 6, 2009.”

Note that the letter says that Intuit doesn’t “wish to suggest that Mint is engaging in false advertising”, despite the fact that that was the entire purpose of the letter. Nice.

Aside from Mint’s remarkable growth rate, Intuit’s concerns focus on the startup’s definition of “users”. Mint’s reply states that the company considers anyone who has filled in an Email address, Zip code, and password to be a “user”, regardless of whether they’ve ever actually linked their bank account to their Mint user name. This figure obviously overstates the number of people who actually use Mint on a day-to-day basis, but it’s also a fairly standard way to define “users” for most web services. As an outside check, Comscore counts 416,000 monthly unique visitors worldwide, and growing rapidly (see chart below). 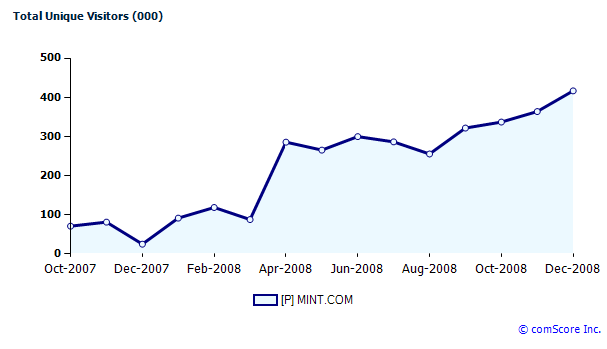 That said, Mint’s definition of “user” raised some concerns for me – I suspected that after entering their Email information and getting counted as a new member, many of them would jump ship when they realized they’d need to enter their bank account information. But CEO Aaron Patzer says that as of today around 680,000 of 934,000 registered users (over 70%) have linked at least one bank account to Mint, with most of them linking between 5-6 of their financial accounts. Frankly this number is far higher than I was expecting, and indicates that most people visit Mint with the full intention of entering their account information. Patzer also notes that while those users who haven’t linked their bank accounts to Mint will have access to less functionality, they still receive regular offers from Mint’s partners.

Could Mint have been more transparent with its user numbers? Probably, but their methodology for measuring user stats is par for the course here – certainly nothing worthy of Quicken’s demanding letter. The bottom line here is that Mint is growing so quickly (it will soon pass one million users—no doubt spurred by the bad economy and tax season), that its competitors literally can’t believe it. And for any startup, that’s not such a bad thing.

Update: Intuit spokesman Scott Gulbransen has offered the following response to this story:

We’d like to apologize to Mint.com if our letter came across as anything but a simple request to understand how they count their users. Businesses do this all the time and we appreciate their reply.

We are so pleased with the rapid growth of Quicken Online, we were just curious about how we’re doing. And now that we have a common yardstick by which to measure, we know we’re doing great based on an apples-to-apples comparison. Quicken Online now has more than 650,000 users and has been adding on average approximately 45,000 new users a week since Jan. 2009.

So now you know…customers are choosing Quicken Online more than ever before.

Here are the two letters: