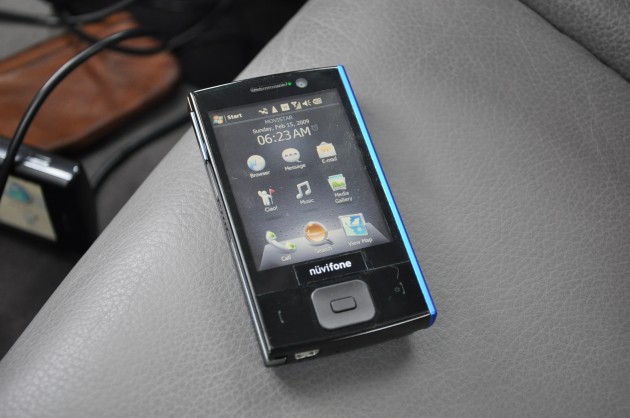 This may give you an idea of how crazy Mobile World Congress can get: the first hands on demo of our trip went down when we were still at the airport. Well, in a car right outside of it – but still. Garmin/Asus offered us a ride to our hotel along with a hands-on of their newly announced nuvifone M20; a free ride and a product demo? We couldn’t resist.

While we appreciate them sparing us a cab ride, we didn’t walk away too impressed with the M20. Read on for our impressions.

It’s important to note that the hardware we played with was a prototype (note the temporary straight-out-of-the-label-maker badge on the front, for example), with the software considered pre-beta. It’ll no doubt see a good bit of polish before it hits the shelves.

We weren’t quite sure what Garmin was doing in the hardware business when they announced the G60, and we’re even less sure with the M20; they claim that it’s because they’ve really got a lock on the location-based services market – but it seems like everything they’re bringing to the table could (and probably should) be done with software. I’d buy the Garmin for Windows Mobile app, for example, but I probably wouldn’t buy the Garmin-Asus M20.

Garmin did assure us that they’ve got Android stuff on the way, but had no further details to share. We look forward to seeing where they go with that.