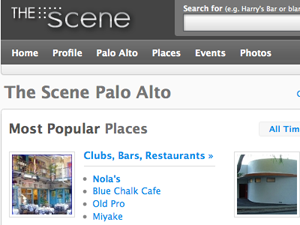 The Scene, a new social network geared towards improving your nightlife, is making its public debut at the Twiistup 5 event in Santa Monica, CA today. After three months in beta, the company is announcing the seed round of funding it has raised from Velocity Interactive Group and angel investor Marko Babic. An iPhone application (for when you’re stumbling around the streets at 1:00am looking for the next bar) has also been released.

The Scene has a strong “let’s go out to a club and get drunk” vibe to it (not that there’s anything wrong with that). But it makes me wonder how many people who have this urge will actually boot up their computers and start planning out the best way to go about it, let alone carry the iPhone app around in their pockets and post updates to the site as their nights go on. 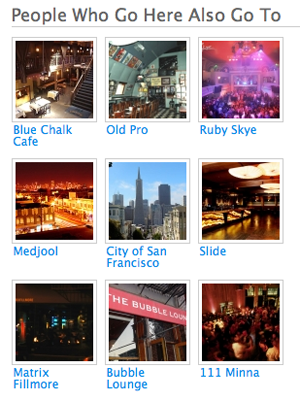 The founders – four graduates from the University of California at Berkeley – obviously felt the need to create a whole new site around this idea, one that could possibly supplant MySpace as the most party-inclined social network around. The Scene started off as an application on Facebook called TheBarBook, which currently has about 6,250 monthly active users (although the company claims it has over 150,000 total users). It’s previous incarnation as a Facebook app shows through clearly in the new site’s design. Many elements, such as the Wall-like area called “My Feed” that displays prominently on the homepage, were blatantly recreated from Facebook. Things to do on the site include sharing your status, adding photos, creating events, viewing profiles, and making friends.

The Scene is also a lot like Yelp, with a near identical set of search boxes at the top of each page that asks you what type of establishment you want to search for and where. Each bar, club and lounge in your area is given its own profile page where users can post quick notes (effectively mini-reviews) and add their own events. Perhaps most usefully, each venue page also shows a list of related places under the header “People Who Go Here Also Go To”. And you can see everyone else enjoys your favorite dive bar under a list simply called “People Who Go Here”. 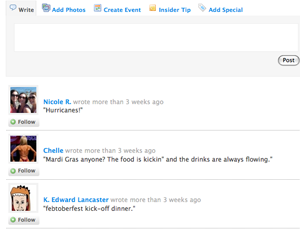 One thing I’d recommend to the team behind The Scene is to open up user profiles. Whenever I click on someone’s avatar, it takes me to a page where I’m abruptly informed that I can’t see the person’s information because I’m not friends with them. This is too much like Facebook where it needs to be a lot more like MySpace. After all, half the point of going out at night is to meet other people who like to have fun, too.

Addendum: I should note that The Scene isn’t the first social network to try translating social network activity directly into real-world experiences. College Tonight tried to convince college students to “get up and get out” (but not via Facebook) and failed spectacularly. It’s still trying under a new name but appears to have been forced into side services like college merchandise sales.

Update: Co-founder Erik Ober has since pointed out that one of the reasons they decided to leave Facebook and build their own site was “due to Facebook’s platform restrictions”. And he explains that TheBarBook’s current low usage numbers are a result of having not worked on the app since last summer and migrating the app’s users to The Scene.