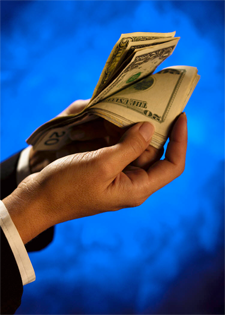 The founders of ConnectU were apparently paid as much as $65 million in cash and Facebook stock to settle their longstanding dispute with Mark Zuckerberg and Facebook, according to an ad unearthed by The Recorder this morning. The advertisment was placed by Quinn Emanuel Urquhart Oliver & Hedges, the lawfirm that represented ConnectU founders Cameron and Tyler Winklevoss and Divya Narendr up until spring of last year, and includes a listing of all of Quinn’s successes over 2008, proclaiming that “It’s Our Opponents Who Need A Bailout.” Listed among the victories was the Facebook claim – a bizarre move given the great lengths all parties involved took to ensure that the press would not learn the details of the settlement.

From the article in The Recorder:

Lawyers in the heavyweight fight had expended great effort to keep the settlement secret — even going as far as persuading a judge to clear the courtroom of reporters on one occasion. But ConnectU’s former lawyers from Quinn Emanuel Urquhart Oliver & Hedges published the settlement amount in a firm advertisement trumpeting the firm’s prowess….
The disclosure was apparently inadvertent. Firm Chairman John Quinn asked The Recorder to not print the amount, citing the confidentiality provision, and declined to comment further.

Because neither Facebook nor Quinn are willing to discuss the ad, it’s unclear how much of the settlement was paid out in equity and cash, or the valuation of the Facebook stock (it may have been based on the vaunted $15 billion valuation established by Microsoft’s ad deal 2007, while recent internal valuations are only around a quarter of that). Given the fact that it’s in Quinn’s best interest to claim the highest figure possible and the apparent lack of judgment from the ad’s writer, I wouldn’t be surprised if the actual value of the settlement is significantly less.

The case centered on ConnectU’s claims that Facebook founder Mark Zuckerberg stole their intellectual property and code to build the hugely popular social network, and has dragged on for years. As The Recorder and other publications have noted, the payout is not necessarily an admission of guilt on Facebook’s part – the company may well have just wanted to put the case (and the associated negative press) behind it.