Google has announced its plan to help consumers gain better information about their personal electricity usage.

The plan, which is listed on Google’s philanthropic website, promotes the adoption of smart electricity meters in homes across the world. These smart meters are better than regular meters because they can provide detailed information about usage rates throughout the day, theoretically letting consumers make smarter decisions about when to leave the lights on or when to run the dryer.

But since installing these devices in homes won’t automatically make the information they gather available to users, Google is also developing a software tool called Google PowerMeter (presumably a web app) that puts this information at people’s finger tips. We can only guess that the graph below is something that this application would produce, since Google hasn’t showed any of it off to the general public yet. The application is currently being beta tested internally by Googlers and will stay that way as Google tries to build partnerships with “utilities and independent device manufacturers”. 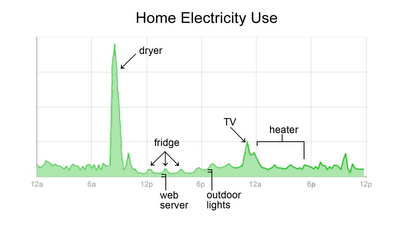 Personally, I find this type of Google project the most exciting. The search giant is using its weight to bring data online that currently exists in a very offline realm. As Google calls it, the electrical utilities system we still use is very “1950s-era”. Who’s jaw hasn’t dropped after looking at their electricity bill at the end of a cold winter month? This sort of situation shouldn’t happen in the information age.

Google is in a unique position to tackle large-scale projects like this one because of its clout and resources. It can throw its weight behind lobbying, development, and partnership efforts all at the same time. That’s why we see Google, and not startups, successfully pursuing projects like digitizing the world’s books and collecting panoramic images from every street across the country. Google’s competitive advantage over more nimble startups is the ability to actually add hard data to the internet while others are just trying to organize what’s already available (or are depending on “social” data that comes straight from consumers’ heads).

Since an important part of Google’s mission statement is to make the information it organizes universally available, we can expect to see the company aggregate the data it collects from individual consumers to provide statistics about usage trends and whatnot. This ultimately has to be what Google has in mind, since simply saving consumers 5-15% on their monthly bill doesn’t warrant such an ambitious undertaking.