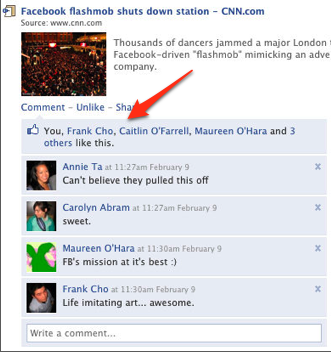 Facebook has just activated a new feature that allows users to leave “Like” labels on photos, notes, and other items across the network. The feature, which is nearly identical to one on FriendFeed, was first seen in a demo video last month but has not been available to the public.

According to Facebook’s blog post on the feature, users will be able to say that they “Like” something whenever they leave a comment. It appears that the feature is being gradually being rolled out, because I can’t seem to find it anywhere.

Facebook has stepped on FriendFeed’s toes with a few other features, including the ability to import activity items from third party sites into your News Feed and the fusion of microblogging with activity streams. We should note that it was Facebook that really popularized activity streams in the first place, and these improvements may well have come about eventually even without FriendFeed’s inspiration.