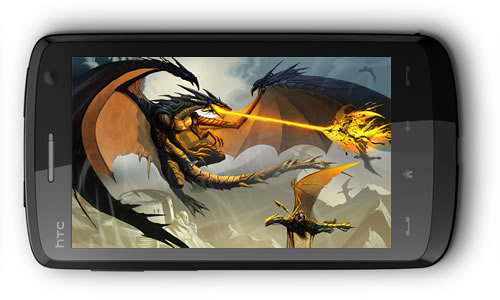 It seems like only yesterday (although technically, it was 48+ hours ago) when Qualcomm’s Snapdragon remained a mythical (mobile technology) beast, yet to be discovered by the modern (handset manufacturing) world.  However, all that changed after Toshiba shocked the cellular industry by unleashing Snapdragon from its proverbial cave with its TG01 announcement.

In traditional medieval fashion, as soon as word of the newly-found monster spread, more (snap)dragon-slayers have stepped up to the challenge of making the new creature their own. According to “market sources in Taiwan,” HTC has its own plans to release a Snapdragon-based device in 2Q09.

As reported by DigiTimes, HTC joins more than a dozen other eager dragon-slayers mobile manufacturers who have “signed up” with Qualcomm to utilize this new, powerful mobile platform including Samsung Electronics, LG Electronics, Acer, Asustek Computer, Quanta Computer, and Foxconn International Holdings, to name a few.

In yet another nod to the (now) almighty Snapdragon (for the record, I know snapdragons are actually flowers and not mythical monsters, but that wouldn’t allow for this post to be one big metaphor of intensity, would it now?), the same Taiwanese sources also noted that HTC will release Snapdragon-based products before launching any of the Intel Atom-based devices it has already been developing.