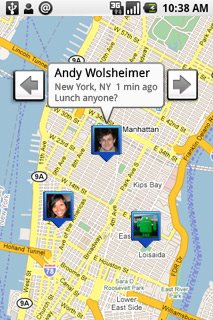 As the clock struck midnight this morning, Google announced Latitude, a new tool purposed with sharing your whereabouts with your contacts by way of GPS. Some call it creepy, and others welcome it with open arms – but it seems like just about everyone wanted to check it out. For folks running Windows Mobile, S60, or BlackBerry, that was no problem. They just had to point their phone’s browser over to google.com/latitude and they were good to go. For Android users, however, that page promised only that it was “coming soon”.

“Soon” indeed – in fact, for those lucky enough to have already had the RC33 update grace their handsets, it had already debuted before it was officially announced. If you’re one of the lucky folk, let us know how it is – we’re still waiting for our update.