Apple was recently granted a gigantic patent covering everything that is the iPhone and a closer look reveals that serious video capabilities might be coming in the next iPhone. Apparently video recording is mentioned frequently throughout the entire document but a few images and sections explain a video conferencing capable phone.

Alexander Wolfe, from InformationWeek, dug up these sections from the patent that clearly explain the video capabilities of the iPhone. Perhaps the iPhone that a lot of people have wanted is finally the works.

“In some embodiments, the functions may include telephoning, video conferencing, e-mailing, instant messaging, blogging, digital photographing, digital videoing, Web browsing, digital music playing, and/or digital video playing. Instructions for performing these functions may be included in a computer-readable storage medium or other computer program product configured for execution by one or more processors.”

Plus, there are fantastic patent pictures. You got to love these things. 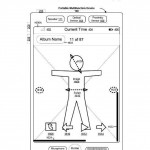 Now, just because the patent describes this ability, doesn’t particularly mean it will be implemented any time soon or ever. The company just wants to protect its assets by including everything the iPhone could be within the legal bounds of the patent. Still, an iPhone with a video conferencing mode is definitely something within the realm of possibilities – hopefully.