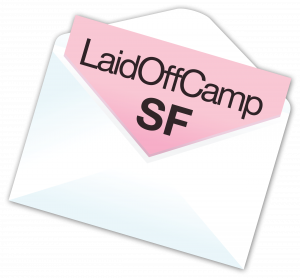 Chris Hutchins, a former management and business strategy consultant who was laid off in early December, is looking to make the best of his predicament and a generally weak economy.
Realizing that he’s just one of many being laid off (more than 224,000 employees have been ejected from the tech sector since August), Hutchins decided to launch LaidOffCamp San Francisco, a “bar camp” style event that he hopes will be a self-organized networking resource, start-up incubator, and group coping session for the recently unemployed in the Bay Area.

Hutchins, 24, said that yesterday’s wave of layoffs inspired him to try building a community for the unemployed and to “create resources for people who need to figure out what to do with their lives after being laid off.” Hutchins hopes to sponsor career fairs for participants but remains cautiously optimistic about finding employers who are actually hiring in the current economic climate.

Unsurprisingly, there are many online support groups that have been created for those who’ve been laid off, including Layoffs Café and iVillage’s Job Seekers’ Support Group. This also isn’t the first time we’ve seen the rise of resources for unemployed techies; the now defunct Recession Camp came to the aid of unemployed dotcommers following the downturn in 2001.

LaidOffCamp takes place at an unnamed venue in San Francisco on Tuesday, March 3 at 10 a.m. Topics of discussion will include how to live on a budget, how to develop a personal brand, and how to find a job in the current market. So far Hutchins has managed to attract only 26 confirmed guests on Facebook; he’s also generating activity for the event via Twitter , Yahoo’s Upcoming, and his wiki.