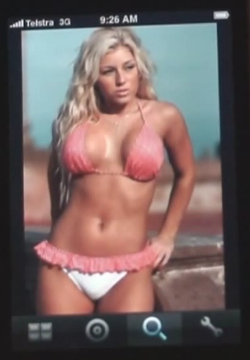 Breasts and the iPhone have had a tumultuous relationship. Last month, an application that allowed users to shake a pair (possibly NSFW) of 3D breasts was banned from the App Store for being apparently too risque for its audience.

A few weeks later an application called Wobble made it into the App Store using something of a loophole – instead of offering pre-rendered mammary shaking, it allowed users to add their own ‘wobble points’ to any picture, which could conceivably have more tame applications (of course, the site made the designed purpose very clear in its demo video, which can be seen below).

Now it looks like Apple is having second thoughts. After hitting the top spot on the Japanese App Store and seeing 20,000 downloads over ten days, Wobble has been asked by Apple to remove anything having to do with ‘Boobs’ and ‘Booty’ from their marketing text. Developer Jon Atherton writes that he tried to point out that this was outright censorship, only to (unsurprisingly) be told that it was Apple’s way or the highway.

But ‘Boobs’ and ‘Booty’ are used many times elsewhere on iTunes, so why can’t they appear on the App Store? Atherton writes:

Doing a search for “Boobs” in iTunes returns 143 results – many of them marked explicit, a search for “Booty” returns 150 items. Not surprisingly Wobble appears at the top of the list in both search terms. there are hundreds of songs in the charts that use the words Booty and Boobies. I asked “Why are Apps different?” – [Apple’s] response, I’m only here to talk to you about the Appstore and can’t comment on iTunes.

Apple has also asked that Wobble modify its YouTube video (seen below), though it sounds like they aren’t mandating a change. Atherton also notes that Apple doesn’t have an issue with the app itself; only with its marketing.

The ban on “sexy” words isn’t particularly surprising given how new the App Store is. Apple is still experimenting with new policies – for months it didn’t allow any ‘burp’ or ‘fart’ apps, which have grown to become disturbingly popular, and it only recently began allowing for developers to build their own web browsers. But the store has a rating system for a reason, and the arbitrary restrictions are tough on developers, who are left wondering what they’re allowed to write about and what they can show.