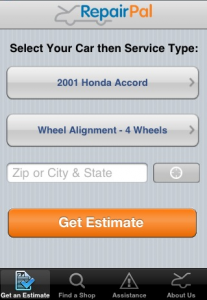 RepairPal, which hit the App Store yesterday, is the iPhone front-end for repairpal.com, a site aimed at helping its users determine reasonable prices for car repairs and providing them with locations of reputable repair shops in their areas. I recently had new tires put on my 2001 Accord and paid $75 for an alignment, so I thought I’d use RepairPal to see if those double-talking weasels at Firestone had pulled a fast one on me. (NOTE: Everyone at Firestone was very helpful and I would go back to them in a heartbeat. However, for the sake of this review, we’ll assume that they’re low-down dirty rats who’ll do anything to milk me for every cent I’ve got.) RepairPal greeted me with a couple of slick drop-down menus to select my car and the type of service to be performed, and, after locating me via GPS, determined that I should reasonably expect to pay $73-$93 for the service, complete with a little graph telling me that the upper 10% or so of that price bracket would probably only be found at the Honda dealership. So thanks, Firestone!

RepairPal also includes a list of shops within a user-specified radius, complete with Google Maps integration, as well as user reviews for each shop. However, there wasn’t a single shop in my area that had been reviewed yet. According to their site, the RepairPal service has been around for a couple of years, so it’s not exactly encouraging to find that in all that time not a single person in my area has used the service, but if you live in a more highly-populated area you might have better luck. The app can also compile a list of towing and roadside assistance services based on your location, which could be especially handy when traveling. It also lists the helpline numbers for most major auto manufacturers, though Honda was noticeably absent from that list.

All in all, RepairPal is probably not something you’d use every day. However, if and when you find yourself in a situation where its services would be useful, it does its job incredibly well, and since it’s free, why not go ahead and try it out?

RepairPal, Free in the App Store.