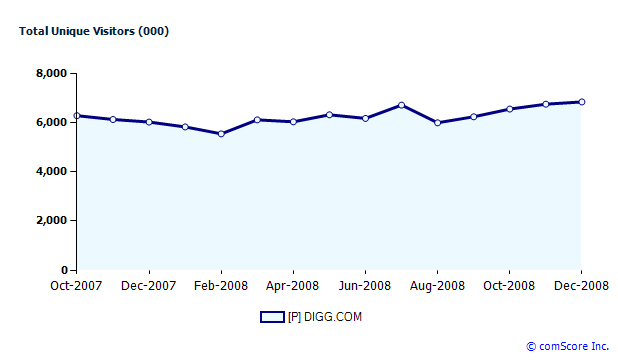 On a day when Microsoft announced 5,000 layoffs, the 7 or so people losing their jobs at Digg may seem like a drop in the bucket. But that represents about about 10 percent of Digg’s 75-person workforce, whereas the 5,000 at Microsoft represents 5 percent. We have added Digg to our Layoff Tracker.

This move follows layoffs last October at sister company Revision3, which was also founded by Kevin Rose and Jay Adelson. Adelson writes in a blog post that his goal is to become profitable in 2009, and he is hiring a salesforce to sell ads directly, in addition to trying to make Digg’s advertising partnership with Microsoft more fruitful.

The paring back at Digg comes along during a brutal advertising recession, and flattening growth at the site. In the U.S., Digg attracted 6.8 million unique visitors in December, up only 2 percent since its last peak in July (comScore numbers). Worldwide, the site is doing a little better, with 17.7 million unique visitors in December, up 7 percent from July