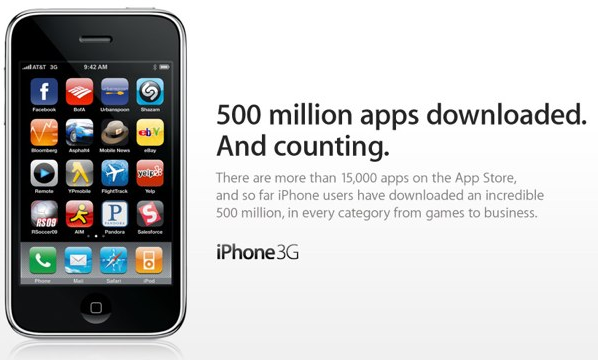 If you were amongst the crowd claiming that the iPhone App Store’s success was a trend sure to quickly taper, you might want to exchange that crystal ball of yours. After 60 million downloads in one month, 100 million by September, and an absurd 300 million at the beginning of December, Apple has now disclosed that over 500 million applications have been downloaded since launch.

Since launch, each months download numbers have worked out to around 2.1 million per day. In the 42 days since the last landmark announcement (300 million, on December 5th), over 200 million apps have been downloaded, meaning December pulled in approximately 4.76 million downloads each day. It makes sense, really – December means Christmas, and Christmas means lots of iPhones and iPod Touches for all the girls and boys.