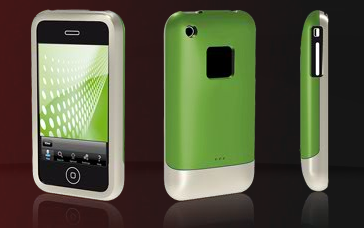 SpatialView has announced the Wazabee 3DeeShell, a protective casing that includes a removable lens to displays 3D stereoscopic images on the Apple iPhone and iPod Touch without those dorky glasses. SpatialView also offers software to create your own 3D images using the iPod camera!

The housing contains a lens that eliminates the need for special 3D glasses, while serving as a stylish protective skin at the same time. The lens can easily be removed at any time in order to switch back and forth between normal 2D and spellbinding 3D graphics.

The 3DeeCamera, available from the Apple App store for 99 cents, lets you take two pictures to produce your own stereoscopic images.

After the pictures have been selected, you can choose to view them as one of three types of anaglyph (red/cyan, red/blue, or red/green depending on the type of glasses you have), or in either parallel- or cross-view side-by-side modes (which do not require glasses).

Be advised, though, that according to user reviews the program slaps its logo on top of your 3D creations.

Pretty cool stuff. It’ll be fun to see what people do with this easy-to-use 3D technology!

Also available from the App Store is 3Dee!oadr, which lets you take photos from Flickr and convert them into 3D. Neat!

Wazabee™ 3Dee!oadr is the ultimate 3D viewing and Flickr management tool for the iPhone and iPod Touch. 3Dee!oadr gives you the option to select side-by-side images from Flickr and convert them on the fly to an anaglyph you can view with 3D glasses. It also lets you to search, view, and manage your Flickr account from your iPhone. You can even save Flickr images to your iPhone for later viewing.