Yesterday Loic Le Meur wrote a blog post asking for an authority-based Twitter search that would allow users to restrict their searches to Twitter users with a large number of followers. A number of bloggers were upset over this seemingly innocuous feature request, citing the difference between authority and popularity and how easy it is to game popularity counts on Twitter. But it looks like at least a few people thought it was a worthwhile cause: twelve hours later, Loic writes that a small team of developers led by Jon Wheatley has launched new service called Twitority that does exactly what Loic asked for.

Below is the letter Wheatley wrote to Loic:

This wasn’t an easy task. There are some very real limitations on the twitter API so we had to hack around it a little bit to find a way to do this. This obviously isn’t an ideal solution but hopefully it will suffice until twitter implements the feature themselves.”

The service seems to be pretty bareboned at the moment, but it’s still impressive for the amount of time it took. Users can choose to search for users with “any authority”, “a little authority”, or “a lot of authority” (no word on how many followers correspond to the latter two), and each result indicates how many followers the user has. At this point it seems like the threshold for the “high authority” settings are too high – I’m often left with no results for queries for popular keywords like “iPhone” and “Twitter”. But now that the technology is built, it will likely be fairly simple for the site to implement more customized settings.

So is Twitority going to mark the end of the golden age of Twitter? Hardly.

Even Loic, who initiated yesterday’s fiasco, has admitted that “authority” might not be the best word for a popularity-based search (he blames his French). It doesn’t really matter what it’s called – being able to filter users by follow count is useful, and is certainly a worthwhile feature. But it won’t spell the end of a “democratic Twitter” because, as Google showed over a decade ago, popularity isn’t the best indicator of relevance. For that, you need an algorithm that can filter out spammy results (don’t be surprised if Twitter is already working on one in-house). 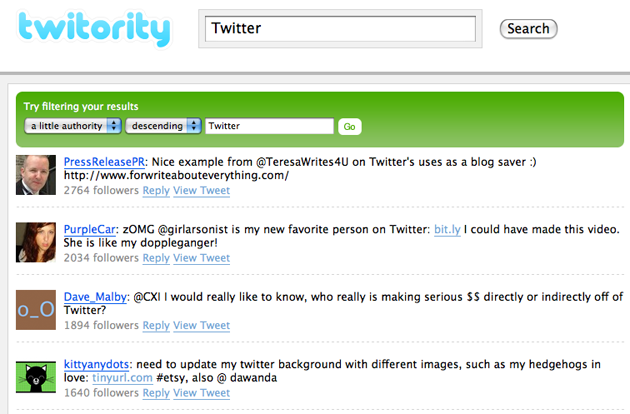