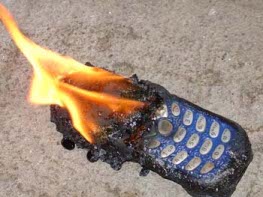 Nokia’s maps caused a big stir in Jabalpur city, India, because they show Kashmir as being part of Pakistan. Led by members of the youth wing of BJP, one of India’s political parties, an angry mob seized Nokia handsets from a local store and set them on fire. Take that, Nokia!

The local BJP legislator claimed Nokia’s transgression was “a case of anti-nationalism. We demanded that the Nokia and other people involved in the conspiracy be booked for spreading anti-national activities. We will intensify the protest if this case has not been registered.”

This is the problem of Nokia and we are not concerned with it as we are merely shop owners, not the client of the company. But, the manner in which the mob entered and started torching the shop is bad,” said Rafiq Khan, the Nokia showroom owner.

You know, if looters set fire to a shop’s product in the U.S., I can guarantee that the store owner would have a slightly different tone.