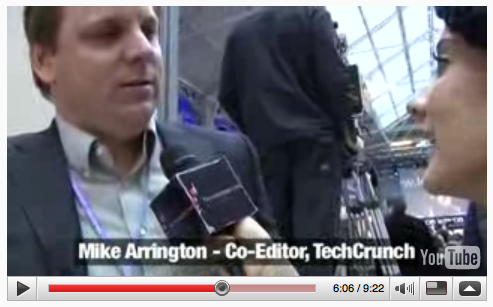 After a couple of episodes, it’s becoming clear that Techfluff.TV is in many respects the UK’s answer to Pop17 and RocketBoom. Every week TechFluff delves into the world of web-celebrities and tech startups, particularly the London scene right now, but increasingly across Europe (if the Le Web video is anything to go by). What’s fun about TechFluff is that it doesn’t take the industry too seriously (hence “fluff”, referring to the lighter side of things – honest). And host Hermoine Way has the hutspa to go up to any Web player and ask them anything – including asking Michael Arrington where he’d like a Gaping Void cartoon drawn. The show comes out every week and is definitely worth catching. The second episode features an interview with TechCrunch UK’s Mike Butcher (me) and the latest one features our esteemed editor at Le Web. Let’s hope it goes daily some time. And while we’re on the lighter side, check out Paul Carr, increasingly the UK’s tech satirist.