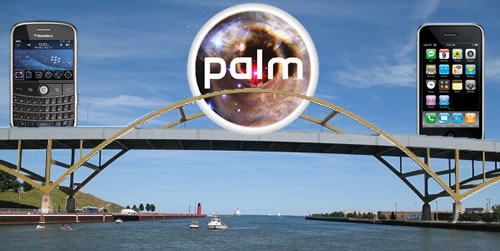 Looking to revive the once-mighty Palm smartphone brand, the struggling company turned to Jon Rubenstein in mid-2007, a former Apple SVP who was instrumental in the development of the iPod and now Palm’s executive chairman in charge of product development, to help turn things around.

More than a year later, it looks like we’re finally about to see the fruits of Palm’s efforts with its secret plan to launch a new operating system, codenamed Nova (Latin for “new”), along with at least one accompanying handset at the 2009 CES. According to Rubenstein, Palm is targeting the “fat middle of the [smartphone] market,” looking to bridge the gap it sees between the work-centric BlackBerry and the more fun-oriented iPhone with its Nova-powered devices.

Palm definitely gets points for ambition, although we’ve seen their lofty goals crash and burn before (see Palm Foleo), leaving plenty of room for skepticism. Perhaps the definition of a nova – a star that suddenly becomes much brighter and then gradually returns to its original brightness over a period of weeks to years – offers the best insight into the future of this unreleased platform.

On the other hand, it would be great, for the sake of competition and consumer choice, if Palm can succeed with its newly designed Nova smartphones. I’m sure there are more than a few Palm fanboys and girls rooting the old champ on against its fruit-related competition.