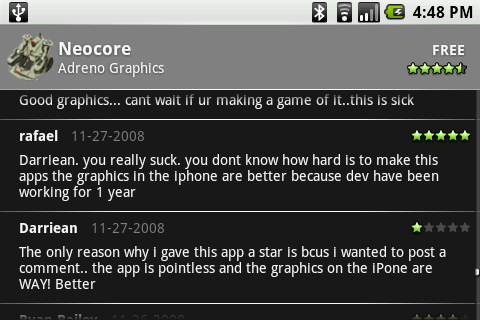 One of the great things about Android Market is that you can see what everyone has to say about the applications they’ve downloaded. Very useful in figuring out if you should really download that app called “Alien Blood Bath” or just avoid it all together.

The system, however, is slightly flawed. It appears that no one is really moderating these comments, and they usually end up turning into heated debates on the most futile of topics. So, rather than let these little gems go to waste, we’ve run into the middle of the battle, and emerged somewhat unscathed with loads of half-baked comments for everyone to enjoy.

Note: These have been copied as-is from the Android Market, with minor censoring.

There you have it, just a small dosage of the magnificent Android Market comments. How long until someone develops an app that bricks phones for people who comment “FIRST!!!1”?