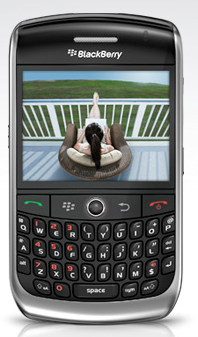 After some many months in the works, the BlackBerry 8900 (otherwise known as “Javelin”) has finally made its way out of the labs and onto a shelf near you. Well, by “a shelf near you” we mean “on a shelf at Rogers locations in Canada”. Not, say, the shelf in your bathroom.

Essentially a BlackBerry Bold Lite, the Javelin’s missing 3G, and has a slightly smaller keyboard, slower processor, and a bit less boom in the speaker department. It’s not all a downgrade, however; the screen is slightly higher-res (480×360 vs 480×320), and the camera has been bumped from 2-megapixels to 3.2. If you’re looking to pinch some pennies (though only about $20 bucks worth) on a Bold and don’t mind being stuck with GSM/EDGE, the Javelin should do you well. Expect to walk out the door with one for $179.99 on a 3-year contract.