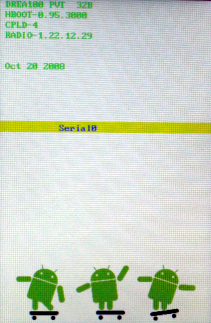 It’s only been a day since Google began selling G1s without firmware restrictions for developers, and someone has already managed to tear out the unlocked bootloader and get it up online. In other words, anyone carrying a modified G1 (Note: You MUST be running a modified version of RC30 for this to work. If you’re already on the official release, you’re out of luck for now) can now enjoy the unrestricted bootloader.

So what does all this mean, exactly? For the time being, not a whole lot. This allows G1 owners to flash their devices with unauthorized (or “unsigned”) firmware builds, which is something that is still at a fairly early stage. That said, it shouldn’t be too long before we start to see some awesome alternative firmware builds (even non-Android – think Linux, or if you’re looking to commit an act of heresy, Windows Mobile.) start to stem from this.

A word of caution from the source:

If this goes wrong, you WILL DESTROY YOUR PHONE. Seriously. It will go PTHHTHTH. So don’t interrupt it, don’t let the battery die, etc.

Heed those words. Installing this could completely brick your phone, so proceed with a big bag of caution. We’ve tested it on our own devices, but your mileage may vary.

Big ups to dream_kill, cmonex, and JesusFreke for their amazing work on hacking up the G1 and Android.