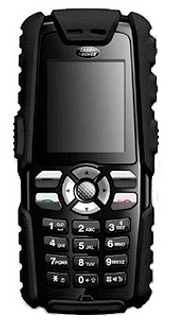 In today’s most perplexing bit of news, Sonim Technologies is announcing a partnership with Land Rover to bring out a series of rugged handsets bearing the British all-terrain vehicle manufacturer’s logo. While they’ve announced two devices, the Land Rover S1 and the Land Rover S2 G4, only the former has been pictured (see right). Awkwardly, the S1 looks almost exactly like the Sonim XP3 that started shipping last month, except with a Land Rover logo stuck up at the top.

It’s water resistant, and certified against drops at around 5 feet, humidity, and thermal shock. Unfortunately, it’s not certified against looking like it’s from outer space. Handsets can be made rugged without being made ugly – the Rugby and the Moto V950 have proven that.

Aesthetics aside, what’s the point? It doesn’t seem to me that people who need rugged phones and people who would care that their phone says “Land Rover” instead of “Sonim” are one in the same. If you plan on buying one of these, let us know why in the comments.