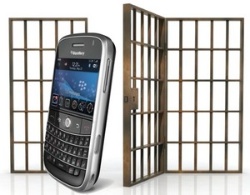 Got just about any GSM BlackBerry laying around that you want to take to another carrier, but just can’t seem to find anyone who can get the job done? You’re in luck. From the darkest pits of who-knows-where, someone has gone and released the MFI Multiloader required to free BlackBerry 8000 and 9000 devices from their reins.

It’s not for the faint of heart – coming in at 800 megabytes split up over 8 files, even downloading it is a bit of a chore. Then you’ve gotta install the application, run Desktop Manager, make the appropriate OS upgrades, delete vendor.xml – it’s a bit of work, but if you’re dying to have a BlackBerry Storm, Pearl Flip, or Bold on another carrier, this might be the easiest (and cheapest) way.

Hopefully someone will get around to putting this up on BitTorrent (let us know in comments if they do), but until then, you’re stuck waiting in the queues at RapidShare. You can find the download links and tutorial over at IntoMobile.