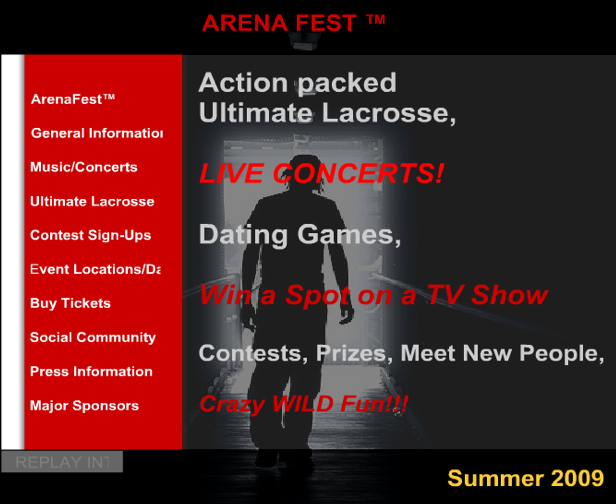 Next summer, you and all your so-called friends from Facebook and MySpace will be able to finally meet in a giant arena, where you ill be able to play dating games, compete against each other in Guitar Hero or Lacrosse, listen to live bands, or check out the modeling contest. The event will be called ArenaFest, and will eventually be held at 50 major sports arenas around the country. Next summer, it will start with 10 arenas in places like Dallas, Detroit, Cleveland, Phoenix, and Anaheim.

ArenaFest will have several draws, including live sports, live music, and live contests. John Ossenmacher, CEO of ArenaWorks Entertainment, which operates ArenaFest, calls it ” our version of live social networking.” People who go will be able to interact with their friends on Facebook and MySpace. And their friends on those social networks will be able to interact with what’s going on inside the arena.

The sport at the event will be lacrosse, which is one of the fastest-growing sports in the U.S. “We are basically building a brand new sports league targeted at this 16-to-24 year old demographic,” says Ossenmacher. But that’s not all.

Live bands, both signed and unsigned acts, will play onstage. For the unsigned bands, ArenaWorks is partnering with SellaBand, the site where music fans can fund unsigned bands. Since its launch in 2006, SellaBand has raised $3 million for musicians to record nearly 30 albums. Now bands on the site will have a chance to tour as well. They will be able to sign up to apply for the ArenaFest slots. If they gather 200 fans, $10,000 towards an album, or the most weekly votes, they get to proceed to Round 2 and play a local venue. The best of those will then be screened by a professional jury, which will determine who will play at ArenaFest.

At ArenaFest, the audience will be encouraged to participate themselves through a variety of contest stations, including a Lacrosse Challenge, Guitar Hero, Next Top Model (to lure the ladies), Dodgeball, and Break Dancing (yes, break dancing). There will also be some sort of dating game.

All of this will cost just $27.50 per ticket, and the whole thing will be repeated weekly throughout the summer at the same venues to encourage the high school and college crowd to keep coming back. “We are changing the whole philosophy of how the arena system works,” says Ossenmacher. Fill up the cheap seats in between games.