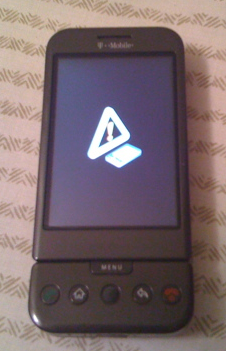 I’ve been using an Android G1 phone for more than a month now on a daily basis, but I still haven’t given up my iPhone. The more I use them both, the more that I realize my iPhone is a Mac and my Android is a PC.

That is not necessarily a bad thing—except for when my Android crashes (which is a lot). Okay, it does not actually crash so much as it freezes up, forcing me to wait until it figures things out. Which it usually does. Except that one time when I plugged it into the wrong mini-USB charger and it gave me the screen of death: a white danger triangle with a cell phone flat on its back next to it. (Sorry for the fuzzy picture, I took it with my iPhone).

Whose fault was that crash? I’m sure it was mine. But believe me, I’m equally careless with my iPhone. It’s just a lot more stable. That’s kind of what you’d expect since Apple goes to such lengths to control every aspect of the device, including the kinds of apps that can run on it. Android apps also have to go through a vetting process, but it does not seem to be as strict as Apple’s.

I make this judgment simply by looking at what is available in its app store, which seems to have been flooded recently. Sifting through all the Android apps, the bar for admittance seems to be pretty low. Some of the descriptions of the apps include messages from the developers. One typical plea:

If it does not install, please try uninstalling old version first. I am working on figuring out why this happens. Please let me know if you have a clue.

A lot of apps in there still feel experimental, which is both a good thing and a bad thing. The quality of the apps is even more mixed than for the iPhone, which might have apps that are just as useless but you can at least count on them to work. The Android apps have more of a free-for-all attitude.

Android is a much more open development environment than the iPhone (or than a PC, for that matter). There aren’t as many restrictions on what parts of the phone an app can access. Right now, that makes for a messier overall experience. But it also opens the door to a much richer set of apps over time.

It almost harkens back to the hobbyist days of the PC. In fact, at the Android launch event, Google co-founder Sergey Brin talked about how he loved to tinker with the Android phone as a programmer:

The first app I wrote was one where you throw the phone up in the air and it calculates how much time it takes to hit the ground, using the accelerometer.

That one thankfully never made it into the Android app store. We’ve covered some that did and that are worth checking out. Among some of the newer ones that I really like are:

ParkMark—Helps you mark where you parked your car so you can find it later.
Orienteer—taps into the internal compass to give you a virtual needle reading.
Translate—uses Google Translate to turn phrases from one language into another.
Pintail—Let’s you SMS your phone if you lose it, sends back its ocation.
JOYity—a game of GPS tag.
Punch-O-Meter—measures how fast you punch.

So if mobile phones are where computers were 30 years ago, which would you rather be?