Whether you like SearchWiki, the new voting and commenting feature for search results Google introduced last week, or not, it was undeniably a bold move for the company to turn on the feature for everyone with a Google account at once instead of gradually releasing it.

Granted, they had been bucket-testing the feature for a while, but for Google to let users mash up the results they are presented with when searching is a big deal. So it’s a bit of a surprise that while everyone was focused on SearchWiki and what it means for the company, Google next to Lively also decided to kill its search sandbox SearchMash (it went “the way of the dinosaur”) instead of using it to test SearchWiki.

SearchMash was an experimental, non-branded search engine that Google used to be able to play around with new search technologies, concepts and interfaces. It was first introduced in October 2006, and unveiled to the public exactly one year after that. Some people actually traded in Google’s search engine for SearchMash, were apparently quite pleased with the experience and are now sad to see it go.

The service wasn’t meant to attract a mass of users, but rather for Google to play around with meta-search features (results for web, images, video and Wikipedia were blended together), third-party integration (it used Snap for previewing landing pages of outside links), user interface experiments (like ‘infinite scroll’ that allowed you to view as many search results on the same page) and technologies (it had an Ajax and Flash / Flex version).

There’s something inherently strange about Google not having used SearchMash as a playground for trying out the SearchWiki features, and even more so that they decided to quietly kill it while at the same launching the latter. 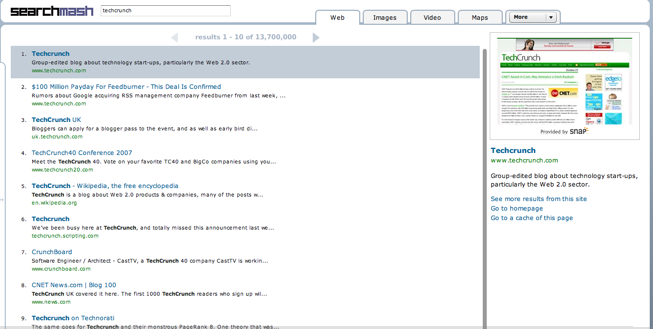