Patent litigation is getting so bad that a new startup, RPX Corp. (aka, Rational Patent) is gearing up to help companies defend themselves specifically against patent trolls (organizations that buy up patent portfolios with the express intention of forcing other companies to license those patents or face a lawsuit). RPX markets itself as a “defensive patent aggregator.” It buys up its own patents, or strikes licensing deals on behalf of its members, and charges companies $35,000 to $4.9 million a year for perpetual licenses to those patents.

In other words, pay up now and any patents in RPX’s portfolio can’t be used in litigation against your company. RPX is clearly not as bad as some of the more egregious patent trolls out there, or even patent funds like Nathan Myrhvold’s Intellectual Ventures. In fact, it promises never to use its patents in litigation against companies, and there is obviously a demand for its services. (Cisco and IBM have already signed up). Ultimately, its business still boils down to a protection racket. An enlightened one, perhaps, but still a protection racket.

RPX has already invested $40 million buying up a portfolio of nearly 200 patents (150 of them issued). It plans on spending a total of $100 million on patents during its first 12 months. The company raised an undisclosed amount last September from Kleiner Perkins and Charles River Ventures, and also has other sources of capital, including debt and credit lines, available to it.

RPX’s model borrows a little from Intellectual Ventures (where CEO John Amster hails from), but with a twist. Amster used to be in charge of patent acquisitions at Intellectual Ventures, which buys up billions of dollars worth of patents and then gets companies to license the entire portfolio. If companies decide not to play ball, the threat of massive patenet litigation hangs in the air. With RPX, Amster is adopting more of a defensive model. He explains the difference to me this way:

Nathan’s model is to make money licensing patents. We are not a fund, we don’t have capital we need to return and then generate a profit on top of that. They have said they can increase what they can charge based on the value of their portfolio.

In an offensive model, you have to build the portfolio before you can get anyone to pay you. Our pricing is set on a rate card based on the value of the service, which is based on the size of your company. We are guaranteeing the rate card won’t change, other than CPI adjustments.

As I mentioned already, that “rate card” can be up to $5 million a year. But for many companies it might be worth it simply to take the risk of litigation off the table around those 200 (and growing patents) in RPX’s portfolio. Even the $35,000 a year RPX charges startups is less than defending against one patent claim.

Also, it is important to note that because of RPX’s defensive model, it doesn’t actually have to buy all of those patents. Sometimes it will just buy a license from the patent holder indemnifying all of its members from litigation. So just because RPX won’t sue over the patents does not mean that the original owner won’t. The only way to get protection is to pay up.

And even if a company does pay up, RPX will only protect them from lawsuits related to its patents. Amster is the first to admit that RPX is offering a hit-or-miss proposition:

It is like mosquitoes. How do you know the one that you swatted would have stung me? It is not a vaccine, it is not perfect.

What RPX really offers is a team who knows how the patent game is played, buying up patent rights on behalf of its members. They know how it is played, incidentally, because they used to play for the other side. Patent trolls, known as “non-practicing entities” (NPEs) in legal parlance, are making up an increasing percentage of all patent litigation—nearly 17 percent last year, up from about 3 percent at the beginning of the decade. And intellectual-property litigation always goes up during a downturn (see charts below). The folks at RPX are gearing up to do battle against the patent trolls they once worked for. Amster explains RPX’s patent acquisition strategy:

We are not just looking at the technology covered by the patent, but just as important is who owns them today. If they are sitting in someone’s attic we don’t need to wake the sleeping dragon. We will buy things on the open market where we think they will end up in the hands of someone who will assert them.

The only thing rational about paying protection money to RPX is that it charges less than all the other patent thugs out there. 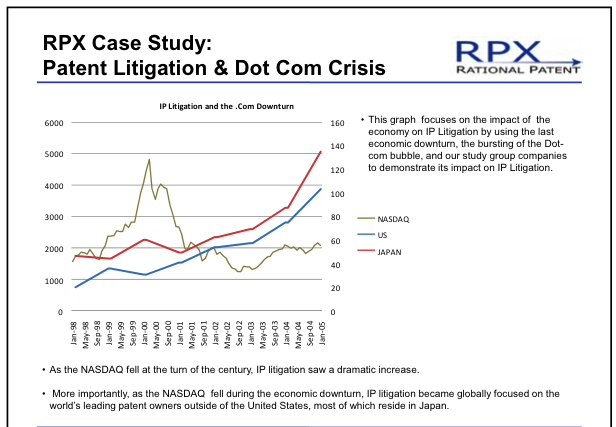 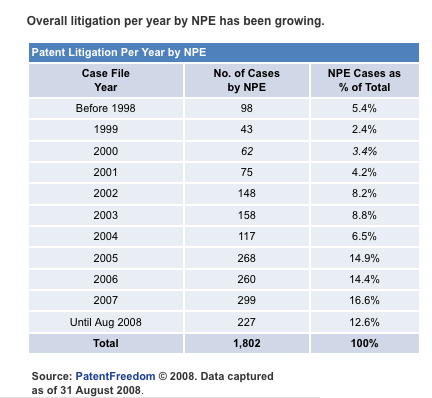