IM+ is an application created by ShapeServices, which aims to replace the instant messaging application that comes out of the box with Android. Hoping that there were some differences between the 7-day trial and the paid version, we bit the bullet and plopped down the 20 dollars (well, $19.95) on this app to see how it really is, so you wouldn’t have to. The verdict? Save your cash.

Let’s start off with what IM protocols IM+ supports: AOL, MSN, Yahoo!, Google Talk, Jabber, ICQ, and Myspace IM. While that’s not too shabby, we were disappointed to find out you can only have one account per protocol. The IM client provided by Google already supports AIM, Google Talk, MSN, and Yahoo, so you’re really only getting Jabber, ICQ, and Myspace. Is that worth twenty-dollars? Meh.

Sending and receiving messages is easy enough. It’s just how you would expect it, although I strongly dislike how it throws all of your contact lists on one screen. I’d prefer to see them separated by service rather than one hefty list of buddy groups, or at least, let me make it that way through an option. Oh well – Some folks love the big collective list. That’s kinda worth twenty-dollars, right? No? Anyone? 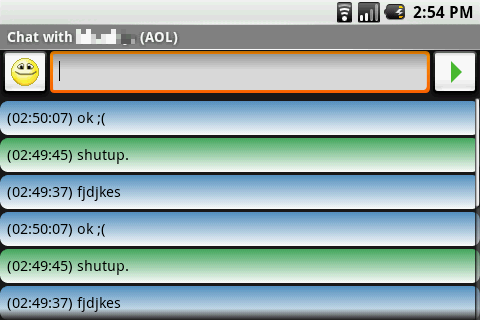 With any new application, you’re likely to come across a bug or two. IM+ is no exception. The most notable issue we noticed is that if you switch screens or change the device orientation then go back to a conversation window, it occasionally doubles the text as seen in the picture above.

Are you one of those people who prefers to sign in and out of their IM client rather than just going away for a few minutes? Then you’re in luck. Otherwise, not so much. After many, many days of testing and trying, it just wouldn’t maintain the connection if the application wasn’t in the foreground. We were hoping that perhaps this was a limitation of the trial, with background connectivity saved for the full application. Again, nope. That’s totally not worth twenty-dollars. Once a nice background service has been developed for this app, then maybe, just maybe it will be worth it.

Unless Jabber, ICQ, or Myspace IM are crucial for your communication needs, skip out on IM+ – it just doesn’t bring anything to the table to make it worth the entry fee. Hopefully it won’t be too long before someone from the Pidgin or Adium camps grabs an Android handset and pushes out something worthwhile.