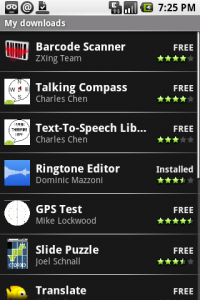 Yesterday morning, a sizable chunk of the T-Mobile G1 pre-orders showed up prior to their expected arrival date of October 22nd. Filled with new-toy glee, the new Android users tore their boxes open, poked and prodded at the screen.. but something was wrong.

Reviews said something about there being 50+ applications already available in the Android App Market. Even immediately after the device was announced, there were 18. By a count yesterday morning, there were only 13. As was to be expected, the internet quickly filled with conspiracy theories. Was Google shaving down the list to save bandwidth? Were they pulling off a significant chunk of the applications so that they could be rolled out over the days after launch, making the content stream seem torrential?

Nope – turns out, they were just giving things a quick once-over before the big day. By mid-day yesterday, the count was back up to 20. This morning, it’s hovering right around 30. Google’s official statement on the matter:

The demo devices give an early version of the Market since it hasn’t been launched yet. We needed to be sure that a few of the 3rd party apps are final for consumer use in the Android Market when the T-Mobile G1 officially launches on October 22nd. We’re replacing the preview applications with final versions today. After October 22nd, developers will be managing their own applications.

We anticipate there will be 40 to 50 applications available on Android Market when the T-Mobile G1 launches on Wed (10/22) and that number will continue to grow as additional applications are added daily.

With that, the panic bells are slowly fading, and all is returning to normal. When the G1 officially launches tomorrow, all should be well in the world, with at least the majority of applications nestled right back in their original spots, now with that final stamp of approval.