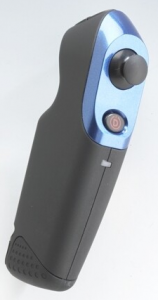 Lets face it: By and large, gaming on mobile handsets sucks. Sure, no one’s expecting (or even desiring, perhaps) an experience along the lines of a couch-camping session – but even the simplest of games are hindered by, amongst other things, the lack of intuitive input methods. While we’re able to quickly rewire our noggins to play Tetris on a number pad, it just never feels right. Why? Because a number pad (or a touchscreen, mind you) wasn’t meant for gaming.

Whether or not a separate Bluetooth controller is the best solution is arguable, but the guys at Zeemote think so. With Sony Ericsson, Nokia, and countless mobile game development companies already on board as partners (with the first two going as far as to bundle the controller with a few of their handsets), they’re looking to expand the family a bit: just about an hour ago, they announced that they will be releasing a software development kit for the BlackBerry platform. They’re not saying when, just yet – just that it’s on the way. Interested? Hit up Zeemote’s booth at the BlackBerry Developer Conference (Oct. 21-22), or pitch your pre-registration inquiries to bizdev@zeemote.com.

At the moment, they’re not selling the Zeemote JS1 as a standalone unit, nor are they partnered with RIM. With this announcement, we’ll go ahead and assume that one of these matters (probably the former) is set to change sometime soon. It just doesn’t make a whole lot of sense to add JS1 compatibility to your game be it that no one will be able to make use of it in the foreseeable future.