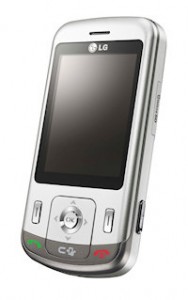 As they so sneakily mentioned they would do in last week’s Renoir announcement, LG has announced the 8 megapixel KC780 slider phone.

When the promo shots of the KC780 were leaked back in September, rumor had it that LG had been internally boasting that their 8 megapixel handset was the slimmest of the bunch. Seems like the Samsung Pixon may have just barely nabbed the title from them, coming in just 0.1mm slimmer than the 13.9mm KC780.

If the press release is any sign, expect the KC780’s camera to be the dominant feature on the handset. The only non-camera specs mentioned are the 2.4-inch LCD, and Bluetooth – then they go on for a page or two about the Schneider-Kreuznach lens, smile detection, the ability to shoot up to ISO 1600 for low light shots, built in image stabilizer, and “DVD-resolution” video recording.

No price is set just yet, but I’d imagine that it’d do a bit less damage to your pocket than any of the touchscreen-totin’ 8 MP entries. Europeans will be gettin’ it in November, after which it’ll migrate to India, Thailand, Hong Kong, and China. Doesn’t look like this one will be making a tour of the Americas.