Google has just launched a new homepage for its blog search that bears a strong resemblance to Techmeme, Memeorandum and their “memetracker” counterparts. The site displays a listing of the top stories from across a variety of topics including business, politics, technology, and entertainment.

Memetrackers identify emerging trends on the web, especially across blogs. They are often the best way to learn about breaking news stories, as they can automatically monitor hundreds (or more) news sources at once. Major news outlets and user-submitted content sites like Digg often trail memetrackers by days.

Google may well be able to leverage some of the technology it has developed for Google News, which identifies emerging news stories across thousands of sites run by newspapers, television stations, and other media sites. But at this point it’s too early to tell if Google Blogsearch will be more useful than any of the other memetrackers (or if its even in the same league). Much of its utility will lie in how often the listings are updated, how many sources it pays attention to, and how it assesses a blog’s credibility – a memetracker is only as good as the stories it presents.

Google may be able to create a useful tool, but that may not be enough to overcome the established leaders in this space. In 2007 the New York Times launched its own TechMeme killer, which has largely been ignored. There’s something about TechMeme which keeps bringing people back to it. 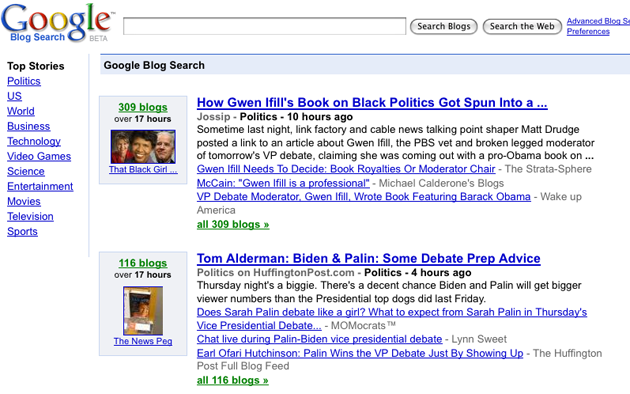