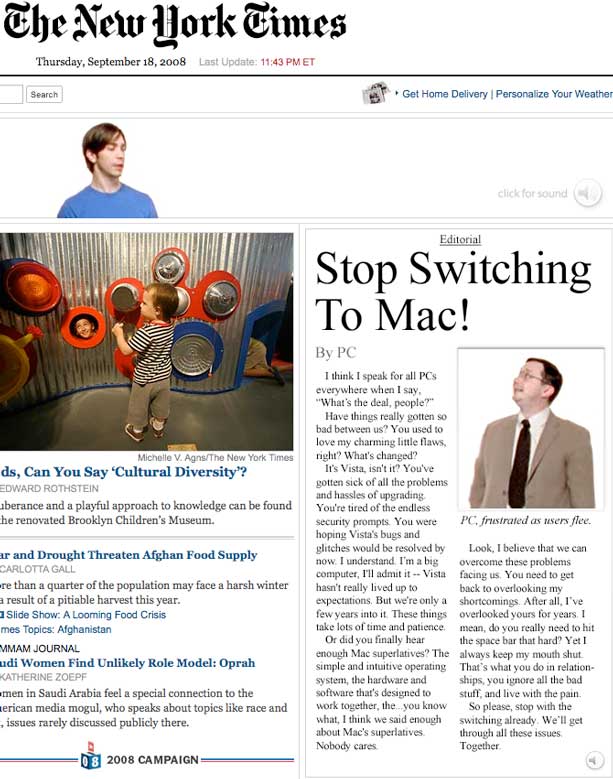 I sat down to write a post that highlights the really innovative new Apple ad running over two ad units on the New York Times (see video below). The ad unit came out today, the same day as Microsoft released their new set of “I’m a PC” commercials, and shows once again that Apple is always one innovative step ahead of just about everyone else. A video of the ad is below.

Except…the ads aren’t quite as funny any more. And the post that I was going to write, about how much better Apple is at messaging than Microsoft (which is true), just kept writing itself differently. And so I scratched the original post and here I am (a topic for another time is how I never quite know what I’m going to write until I’ve written it).

Those Microsoft commercials aren’t particularly engaging, and they don’t make me want to go out and buy a copy of Vista. But what they do is show lots of fascinating people saying that they use PCs. They highlight the fact that many people may be somewhat offended by the idea that they can’t be interesting or cool if they don’t use a Mac.

Suddenly, Apple looks a little elitist. I mean, they were elitist before, but in a way that made you want to be a part of the club. Now, they just seem a little snobby.

If that’s what Microsoft and their pushing clients to the edge advertising agency Crispin Porter + Bogusky were aiming for, it’s brilliant.

With Microsoft’s still dominant market share, all they have to do is fight Apple to a draw and they still win. And if Apple can’t continue to beat Microsoft over the head with their Mac v. PC ads, they’ll have to think up a new way to get people’s attention.

I still think the Seinfeld commercials were a flop, but I give them credit for this new set of commercials. We’ll see if Apple continues to run their ads, and how people respond to them. But Microsoft may have just made a really smart move.

That New York Times Apple ad is really cool though. I give them that.