In my humble opinion, the biggest issue concerning the Peek e-mail device isn’t whether or not it does what it’s intended to do, but who is it intended to serve? There’s a big market out there, to be sure. Who doesn’t have e-mail nowadays? Doesn’t matter, there aren’t many of them and they’re not reading CrunchGear.

I’ll make that first question – Who is Peek intended to serve? – two pieces of bread in a delicious gadget sandwich. The meat inside will be the review of the device itself.

And so we dance.

The Peek device is nearly identical in size (but not weight) to a pack of your favorite square-shaped gum. So if you’re able to fit some Dentyne Ice in your pocket, you’ll undoubtedly have room for the Peek. It’s just under four ounces, which gives it a not-too-heavy-but-definitely-solid feel.

The device costs $99, plus $20 per month for service. Everything is set up on the Peek itself when you first turn it on and there are no long-term contracts to sign. You basically enter your credit card number along with your e-mail address and password and that’s it. A baby could do it. A little, dumb baby (that can somehow read and type and has a credit card – man, this baby actually sounds more cool than dumb).

Once those two minutes of your life have passed, you’ll be greeted with your inbox. I was able to set up my Gmail account and watch the messages slowly (and I mean slowly) trickle in. I thought something was wrong at first because nothing showed up for about twenty minutes. Once all the wheels started spinning, though, messages came in relatively fast and non-threateningly furious. Peek has automatic settings for most popular e-mail providers and you can set up three accounts if needed – messages from all three providers will come into the same inbox, though. The service uses the POP3 protocol, so messages you delete on your Peek won’t be deleted from your regular inbox. There’s currently no IMAP or Exchange support, which shouldn’t be a surprise for a device focused on dead-simple e-mail.

As far as message handling, it’s pretty much text, text, and more text. The device does handle JPEG images as attachments, but that’s about it. It won’t display images embedded in messages or any HTML. It’s just plain text. Here’s an image attachment:

Pretty standard. It actually looks better in real life. My camera picked up some pixilation there. The real thing looks just fine. The device has a 2.5-inch 320×240 screen that’s bright and crisp. Battery life is rated at 2-3 days with moderate usage, which seems to be about right. I haven’t sent a lot of messages from the device, so I’m guessing I’ll be able to squeeze another day or two of juice out of it.

According to the company, service is provided by “a prominent US nationwide network,” which is a fancy way of saying T-Mobile. I can’t tell what speed the data’s running in and out at, but if I had to guess, I’d think it was EDGE. It definitely feels faster than GPRS and there’s not a whole lot of point to pushing text-only e-mail over T-Mobile’s new 3G network. It’s possible that it could be a GPRS connection, though. Whatever the case, it’s quick. Oh, and new messages are checked every five minutes.

The keyboard is above-average. Not the best mobile device keyboard I’ve ever used but much better than most of them on the market right now. There’s a dedicated top row of numeric keys, which is a nice touch, and it’s pretty easy to type combinations of letters, numbers, and symbols quickly. I’m not crazy about the delete/backspace key being next to the L key as I’m used to it being next to the P key on most keyboards, but I’m pretty sure I’ll live. I’ve already accidentally deleted a few e-mails, though. 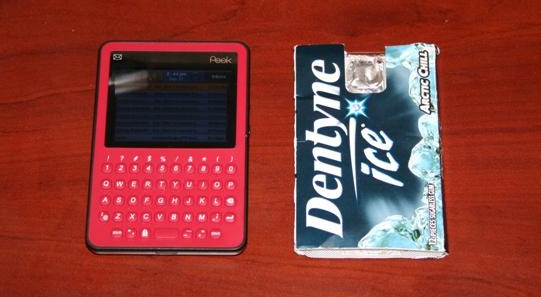 And now we’re back to our original question: Who is the Peek intended to serve? Perhaps the question’s not mine to answer, but I’ll give it a go anyway.

First off, if you’ve researched the device and you’re wondering about how well it works and the build quality and all that, go out and buy it. You won’t be disappointed.

If you already have a smartphone or PDA device with a QWERTY keyboard and a data plan, then Peek wouldn’t really make much sense for you. On the other hand, if you have a regular cell phone and want to be able to read and respond to e-mail, then you’ll have to decide to either drop $100 on the Peek and another $20 per month for service or to upgrade your current phone and add a data plan. Both options would probably come out to about the same monetary amount.

If you’re a parent and your good-for-nothing kids send text messages all day long but never talk on the phone, buy them each a Peek immediately. This thing could be huge with kids. However, keep in mind that it doesn’t play games, there aren’t any ringtones, and there’s no camera. If you’re a tough-but-fair parent, this could be a good compromise for when your two-year old starts asking for a cell phone (that’s when most kids these days start getting phones, right?).

Whatever the case, the device itself does what it’s intended to do, so don’t worry about that. It’s well-built, relatively affordable, and it “just works.” Now Peek needs to see if enough people actually want the device. There probably won’t be any middle ground, either. It’ll to be this year’s Furby or collapse on itself like a dying star.

Actually, lowering the monthly fee to $14.99 or $9.99 might work wonders. We’ll see, though. It’s still early and the holidays are right around the corner. All in all, the Peek is a thoughtful, “just works” device that’ll hopefully find a niche somewhere.