Tom Kincaid, a top platform developer and blogger mentioned in the Facebook Developer Forums last night that Beacon seems to be rearing its ugly head once again. (Update: And although Facebook’s Beacon platform was never actually removed from the service and the feature is not new, partners had backed off from it, which gave the perception to some that it was dead. Since then, Facebook has improved the service to make it more amenable to partners and users alike.)

According to Kincaid, he signed up for CBS Sportsline and got a Beacon-like pop-up, which he thinks may have used a Facebook cookie.

“I signed up on CBS Sportsline and joined fantasy football,” he wrote on the forum. “I got a pop-up on the bottom right. It looks like the old beacon stuff. I thought that didn’t work anymore, but it published a story to the homepage. I didn’t go through any kind of connect log in, it must have used the Facebook cookie somehow.”

Much like Jesse Stay from the Staynalive blog, I found the same Beacon script (src=”http://www.facebook.com/beacon/beacon.js.php?source=10228841580″>) in the source code. I then clicked on the “Learn more” button and was brought to a Beacon information page.

After seeing the Beacon pop-up on CBS Sportsline, I went to other original Beacon partner sites to see if I could recreate the same experience on sites that Facebook may have been able to coax back into the fold, but I wasn’t able to. I signed up for TripAdvisor, but no Beacon pop-ups were displayed and I had another failing experience when I signed up for Zappos.

It now looks like Beacon gives you the option of posting Beacon updates in your timeline. If you click OK, it will be posted. But if you instead choose to remove it, you won’t find any mention of it in the timeline.

(Update: This is not new. Since late 2007, Beacon has been available on dozens of participating sites after the company made a series of improvements to ensure that users have control over what information is shared with their friends on Facebook.) 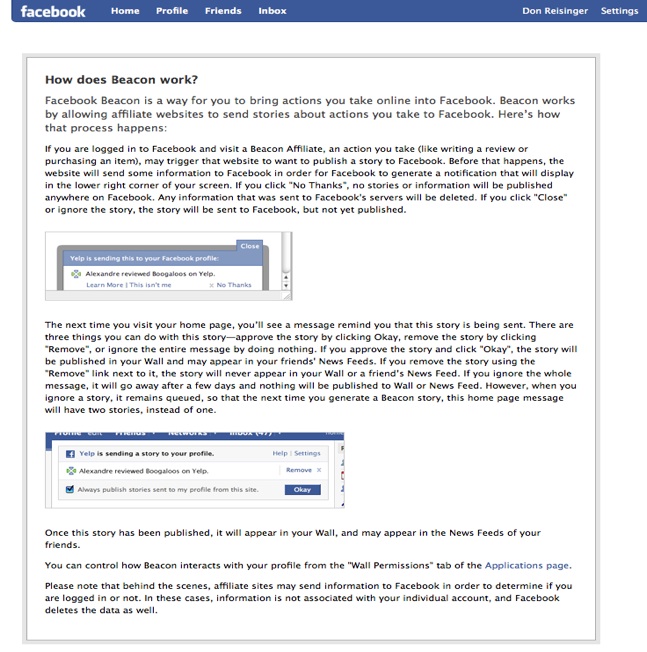