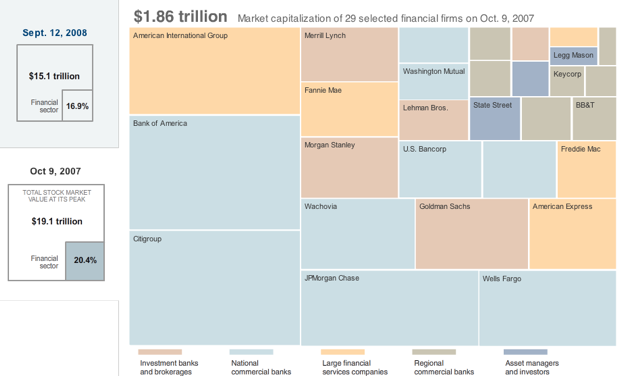 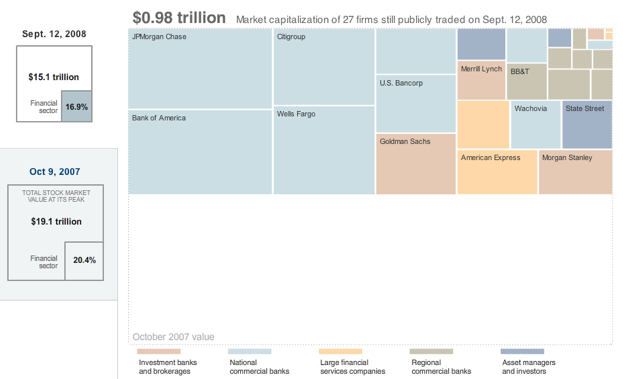 The collapse of so many major financial institutions in the past year, and over the past few days especially, is hard to fathom in its enormity. Sometimes you need a good visual to put things in perspective. The New York Times has an interactive graphic up on its site that pretty much says it all. It shows that $4 trillion has been wiped off the total market capitalization of the U.S. stock market since last October. Of that, nearly $1 trillion is from the decline in the financial sector alone.

Each box in the graphic is proportional to the size of the market capitalization of the biggest financial firms then and now. As you mouse over the squares, you can see how much each value each company lost between October 9, 2007 and September 12, 2008. Here are some of the individual losses by market cap:

It is staggering when you look at it all together, and when you realize that the companies still standing like Bank of America and Citgroup, have seen bigger market cap declines than some of the institutions that have gone under (Lehman Brothers) or that had to be bailed out (Fannie Mae, Freddie Mac).  For the estimated 150,000 financial sector employees who have already lost or will lose their jobs this year, the outlook is bleak.  (Although, First Round Capital and Union Square Ventures are already openly trying to recruit a select few of them for their portfolio startups—quant jocks are especially welcome).