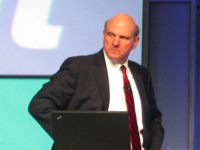 Microsoft, for all its problems, is a great software company. Its core products, the Windows operating system and the Office productivity suite, still dominate their respective markets and, while they are continually facing more capable competition and hence have declining market share, Windows and Office remain strong product offerings.

Yet, it is clear that something is rotten in the State of Redmond. A reading of Microsoft’s Annual Report only strengthens this conviction. For those that do not want to read the entire thing Brier Dudley’s blog offers an excellent summation, focusing on the issues that keep Ballmer up at night.

However, it does not seem to be the competitive landscape which has changed the consumer orientation towards Microsoft. What has really thrown Microsoft off, is that other companies have shown those consumers both most willing to try new technologies and most willing to open their wallets for technology, the consumers of Generation-Y, that they do not need Microsoft. Companies like Facebook, Apple, and Google, have changed the way that young consumers consume, and therefore purchase, technology. And that is a very dangerous position for a software company to be in, especially one that is not known for being nimble on its feet.

Facebook is perhaps the clearest example of this. While Mark Zuckerberg and others, brand Facebook a Social Utility, for young people, who really only care about functionality, Facebook succeeds because it is the killer web application for communications and personal information management. Facebook Mail is not without its problems, but the combination of Facebook Mail, Facebook Chat, and what is functionally an auto updating address book, makes Facebook into the new Outlook not only for those who are inside of Silicon Valley, but for anyone of the millions of people who use Facebook as either their sole or their primary digital identity. LinkedIn, is even more explicit than FaceBook is, in trying to become a person’s primary stop for vital, in this case professional, communications, as it is functionally a digital Rolodex.

Another example of Microsoft’s inability to understand younger users, comes in what I can only call their software design philosophy, which I can summarize as “Throw in More Features”. Yet, that seems antithetical to those products which are selling most successfully in the market place, especially to young people. Microsoft Office is the clearest example of this. The myriad number of options buried in Word 2008’s ribbons, will rarely be used by most users. And in Excel 2008, some users might need pivot tables, but vast majority of those that use spreadsheets will never ever need to use them, nor will they ever write a macro, or script in Visual Basic. What is clear from the success of Google Docs and Zoho, especially amongst college age students, is that people want tools that are simultaneously powerful and simple to use. And that is why not only are web based office replacements, which focus on ease of use,facilitating collaborative exchange, and being able to publish in digital environments, but also iWork and Star office, are gaining traction.

So, what is the take away from all of this? For Microsoft to pick up the proverbial ball and start running with it, it will need to listen to what the consumer wants, and design products that fit those needs, rather than assuming that the consumer will buy whatever it is that Microsoft hands them, just because it is a Microsoft product. And, the young consumers of today, the big spenders of tomorrow, want products that are focused on mobility, ease of use, speed, and simplicity. Perhaps what is most frustrating is that it is clear that it is not the hardware that is keeping Microsoft from building an Apple killer. There are great products that run the Windows platform. But young consumers, I believe, do not want just great hardware, but want a great computing experience, given how they create, disseminate, and consume information. Until Microsoft starts listening to young people and creating products and services that simply work, and that means no crashes, no blue screens, and a dead simple user interface, it will not surprise me that a melancholy mood will hang over Microsoft, and its share price.