The Ultimate Football Network tries to harness the popularity of fantasy football and turn it into a worthwhile business. The only problem is that the company isn’t quite prepared to do that —yet. But it has a gameplan.

As football season kicks into gear, millions of fantasy players from all over the United States are joining leagues and trying to find the right players each week. But as Ultimate Football Network explains, that’s not as easy as those users might think. The company claims that finding up-to-date information about players is becoming increasingly difficult and fantasy players aren’t prepared as they should be each week.

Trying to solve that problem, Ultimate Football Network collects news from the Web and, much like Digg, lets users vote on each story based on the quality of the information contained in the stories. If the information is useful, users can vote it up, while those that are not as useful can be voted down and will sink to the bottom of the page as the votes start piling up.

But perhaps the most useful feature of Ultimate Football Network is that the site lets you import your fantasy football team from Yahoo and ESPN. It also lets you modify your starters and change your lineup of players without needing to access the respective fantasy service.

It’s that feature that Ultimate Football Network claims will make it profitable. Although it’s not available yet, the company said that by next year’s fantasy football season, it will monitor all the users and see how well they manage their teams (it will establish an ad-hoc points system to track that). Based off that information, Ultimate Football Network will establish an IQ system that will show the best fantasy players. It will then anonymously collect all the team adjustments those users make and find the most common moves among them to create expert data that can be purchased for a monthly fee by users that need some help.

So far, there is no pricing information available and the specifics of the model aren’t fully worked out, but the company claims it will be in place by next year’s fantasy football season.

Even though Yammer took the top prize at TechCrunch50, Loren Feldman at 1938 Media has another take: he thinks Ultimate Football Network should have won it all. 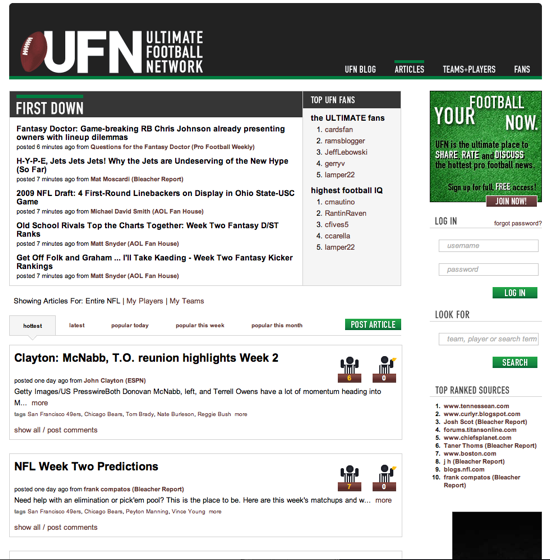