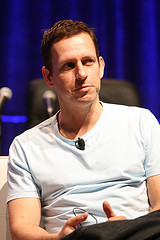 In a long-ranging discussion today at TechCrunch50, investor Peter Thiel (PayPal, Facebook, Slide) gave his thoughts on what is the best predictor of startup success.  At the Founder’s Fund, one of the most important factors he likes to look at before deciding to invest in a startup is how much the CEO is paying himself. (This is also a factor that one of his investments, YouNoodle, looks at to value private startups). Says Thiel:

The lower the CEO salary, the more likely it is to succeed.

The CEO’s salary sets a cap for everyone else.  If it is set at a high level, you end up burning a whole lot more money. It aligns his interest with the equity holders.  But [beyond that], it goes to whether the mission of the company is to build something new or just collect paychecks.

In practice we have found that if you only ask one question, ask that.

In Startupland, everybody should be working towards the same goal: that big juicy exit. That’s the only payday any CEO should be worried about (even though more than half of them will never get it).

What’s the average salary for CEOs from funded startups? Thiel was hesitant to answer, but eventually said “$100-125k.”