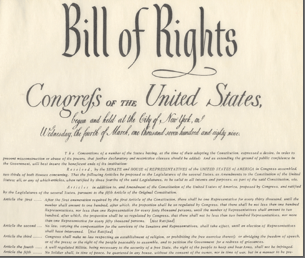 As the Democrats and Republicans gather at their national conventions, it is time to really think about a comprehensive national technology policy for the Internet Age. Many laws and policies governing the Internet and digital property are inadequate attempts to transplant rules from a different era.

The problems that arise are not just about Net Neutrality (see Comcast) or copyright infringement or digital privacy. They are about all of these things. What we need is a Digital Bill of Rights that spells out what freedoms and rights consumers can expect from Internet service providers, content companies, device manufacturers, and the government itself.

Both Presidential candidates have already outlined their technology platforms. (Obama did so last year; McCain only got around to unveiling a formal tech policy earlier this month. Both Obama and McCain also spoke to TechCrunch about their thoughts on tech policy during the primaries). But McCain’s technology platform is a bit vague, and Obama’s choice of tech-challenged Joe Biden as his running mate is not exactly a confidence builder. The fact is that nobody in either party has pulled together a focused set of principles that can truly guide both lawmakers and policymakers.

It’s a tall order, but it is important to have a consistent policy governing everything from Internet Protocol regulations to intellectual property on the Web. With suggestions from serial tech entrepreneur Austin Hill, I’ve come up with a first stab at such a bill of rights. Help me to further refine them in comments below, or add your own suggestions.

The Digital Bill of Rights

The Right to Use and Reuse Content: Consumers know that digital copies of songs, words, and videos are qualitatively different than physical copies, yet copyright law treats them the same way. When the economics of scarcity no longer apply, consumers start to behave differently. They copy and reuse content in unforeseen ways. The pendulum has swung so far that normal consumer behavior has now been criminalized. The concept of fair use needs to be updated and clarified, while still balancing the fundamental right of copyright holders to profit from their creations.

The Right To Control Digital Property On Your Own Device: Possession may be nine tenths of the law, but digital devices don’t follow that rule. When it comes to digital property, who owns what is ill-defined. This can become especially complicated when content is tied to a specific device. If I download a digital book to my Kindle or an app to my iPhone, Amazon or Apple (to pick on them again) have the ability to pull any content from my device without notice or permission. Even if I’ve paid for the content in question. Copyright law and DRM technologies are so intertwined and confused that both consumers and companies could benefit from clearer rules of the road.

The Right To The Free Flow Of Information: Internet service providers, especially those who benefit from public rights of way, should not be allowed to discriminate against information by data type. Debates about Net Neutrality can get bogged down in discussions about content filtering, packet prioritization, and backbone peering rules. But the issue here is basic access to the Internet and all the data that it contains. Data is information and artificial limits on what kinds of data can flow through the Internet’s pipes can amount to a form of censorship.

The Right To (Some) Privacy: For the most part, the expectation of privacy is dead on the Web. But the privacy of certain types of information (health, financial) will always need to be protected. Federal guidelines for how to protect consumer data is preferable to a hodgepodge of industry and state regulations that are currently failing us. (Who wants to book a room at the Best Western?) Privacy laws are also inconsistent in the physical and digital worlds. The Bork law, for instance, makes it illegal for physical video stores to share my rental records, but iTunes or Amazon could sell my digital video or music purchases without running afoul of the law.

The Right to Control Your Digital Identity: And what happens when the “content” in question is your own digital identity. Who owns that? The answer should be that you do. Congress is certainly interested in this issue, and wants to make sure that online advertising networks don’t abuse their possession of your identity data to bombard you with ads. In fact, Google and Yahoo, have been making preemptive moves in an attempt to stave off regulation. But politicians may want to take a closer look at the EU’s privacy directive, which has been in effect for more than decade. Citizens should be able certify that the digital identity associated with their name in a given database is in fact theirs and to revoke access to that identity information on a case-by-case basis.