Goober is an instant messenger developed by a team of Germans now officially based in Delaware that’s going up against the big guys (Skype, MSN, ICQ, etc.) with a desktop client that overflows with features – some useful, some more superfluous.

The cross-protocol Goober client (available for Windows and soon Mac and Linux as well) can be used to instant message with both peers on the Goober network and those using ICQ, MSN, or Jabber. Its built-in VoIP capabilities can also be used to place calls, although video chat is still under development. We’re told that the company is intent on keeping its client software up-to-date on all platforms, including Java for the mobile, so that users enjoy the same experience regardless of device.

So far, so good – although nothing terribly special. Goober differentiates itself primarily by providing a suite of widgets that can be used to solicit communications through the client. An email widget can be placed in the signature of messages and a so-called “portal” widget can be placed on social network profiles and other webpages. Both present buttons for one-click instant messaging, VoIP calling, and file transferring with the user who distributes them. An additional “classifieds” widget assists those trying to conduct business online who want to be reached through more synchronous means than email.

Goober has also integrated entertainment features into the client. The company draws upon free video channels and radio stations found on the internet and allows for the playback of them at the bottom of the client. The quality of this content isn’t superb and I’m not sure why you’d want to use your IM client for media consumption, but there it is anyway.

Among Goober’s various other bells and whistles is a micropayments system that can be used to pay either Goober for VoIP services or whoever has white labeled Goober for its own business (perhaps a media company that wants to deliver its video through the client for a fee). A Jajah-like feature connects two landlines via VoIP to cut down on the cost of long distance calls. And users can send SMSs, MP3s and screenshots to each other from within the client.

Overall, Goober is a respectable IM client, although I find little that would actually entice me to switch over from Skype and AIM. The entertainment features don’t do anything for me, and the widgets are only moderately useful. The user interface could also use some cleaning up, as it confuses and doesn’t look the most professional. However, those who regularly communicate across several protocols should check it out, especially once Goober adds AIM and Gtalk support (both planned).

A special beta access page has been set up here – the first 5000 TechCrunch readers to download the client through there will receive a $5 voucher that can be used to try out the client’s VoIP capabilities.

Also see the recent upgrades to Skype’s IM client, which has moved further in the video chat direction. 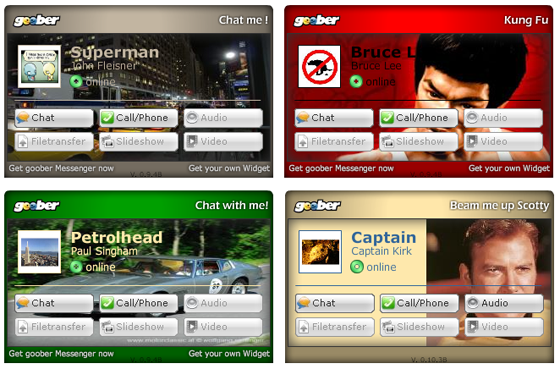